Aerogel is created by combining a polymer with a solvent to form a gel, and then removing the liquid from the gel and replacing it with gas (usually air). The high air content (99.98% air by volume) makes it one of the world's lightest solid material. Aerogels can be made from a variety of chemical compounds, and are a diverse class of materials with unique properties. They are known as excellent insulators, and usually have low density and low thermal conductivity.

Aerogels can be used in various applications, and although they have been around since the 1930s, their development is still progressing (for example, NASA's Glenn Research Center in Cleveland has invented several groundbreaking methods of creating new types of aerogels).

Common applications include enhancing the thermal performance of energy-saving materials and sustainable products for buildings, acting as a high performance additive to coatings, prevention of corrosion under insulation, uses in imaging devices, optics, and light guides, thermal breaks and condensation control, architectural lighting panels, outdoor and sports gear and clothing, and more.

Graphene aerogel, also known as aerographene, is considered to be the least dense solid in existence (graphene aerogels are light enough to be balanced on small plants!). 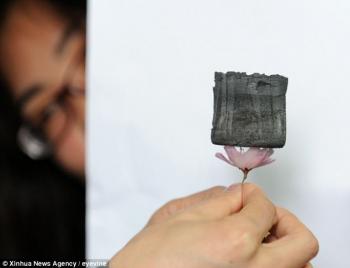 Graphene aerogels are quite elastic and can easily retain their original form after some compression. In addition, the low density of graphene aerogels makes them very absorbent (to the point where it can even absorb more than 850 times its own weight). This means that it could be useful for environmental clean-ups like oil spills, and the aerogels only need to be picked up later after absorbing the spilled material. Graphene aerogel may also have some applications in both the storage and the transfer of energy by enabling the creation of lighter, higher-energy-density batteries - and vigorous research is being done on the matter.

Graphene aerogels are already being sold commercially, for about about $300 per gram.

Lyten, an advanced materials company developing lithium-sulfur battery technology based on Lyten 3D Graphene, has announced that it secured a prototype Other Transaction (OT) agreement in support of the Defense Innovation Unit (DIU) around high-specific energy storage and management solutions.

A core objective of the agreement is to demonstrate a lithium-sulfur (Li-S) battery solution that will significantly increase the duty cycle of small satellites for the U.S. Space Force, which is one of many applications for the new Li-S battery technology. The ultimate goal of the effort is to develop a lithium-sulfur rechargeable battery capable of three times the energy storage capacity of current lithium-ion (Li-ion) batteries, enabling the use of higher duty cycle spacecraft and those that function longer during an eclipse.

Graphene Composites (GC) has announced a research and development partnership with Advanced Blast & Ballistic Systems (ABBS), a leading developer of active systems for protecting armored vehicles from mine and IED blasts.

The partnership will focus on the use of GC’s nanomaterials engineering technologies – particularly GC Shield® technology – to improve blast and ballistic protection performance of its systems, with testing and FEA modelling which explores the use of graphene enhanced materials as a part of its continued development of the underbelly blast plate.

An international research team, led by Germany's Kiel University (CAU) and including scientists from the University of Southern Denmark, Technische Universität Dresden, University of Trento, Sixonia Tech and Queen Mary University of London, has used aero-graphene to develop a new method for the generation of controllable electrical explosions. "Aerographene" consists of a finely-structured tubular network based on graphene with numerous cavities. This makes it extremely stable, conductive and almost as lightweight as air.

The research team has now taken a major step toward practical applications. They have succeeded in repeatedly heating and cooling aerographene and the air contained inside it to very high temperatures in an extremely short period of time. This enables extremely powerful pumps, compressed air applications or sterilizing air filters in miniature.

SmartIR, a spin-out of the University of Manchester, is working on a graphene-based smart coating for satellites, to allow them to control thermal radiation on demand, depending on whether a satellite’s surface is Earth’s shadow or on the side closest to the Sun.

This graphene technology is said to be a far more optimal solution as it is lightweight, has a low power consumption, can respond quickly to temperature changes, operates across the infrared spectrum, and involves no moving parts. 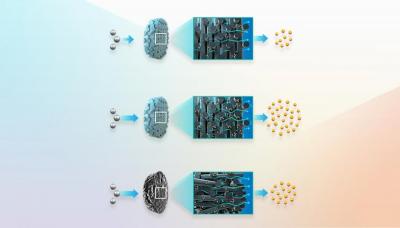 Benefiting from the design freedom afforded by 3D printing, the researchers demonstrated they could tailor the flow in FTEs, dramatically improving mass transfer – the transport of liquid or gas reactants through the electrodes and onto the reactive surfaces. The work opens the door to establishing 3D printing as a “viable, versatile rapid-prototyping method” for flow-through electrodes and as a promising pathway to maximizing reactor performance, according to researchers.