ORA, Canada-based developer of graphene-enhanced audio equipment, recently unveiled its graphene oxide-based composite material, dubbed grapheneQ. A few days ago, the company launched a Kickstarter crowd-funding campaign for graphene-enhanced wireless Bluetooth earphones that promise comfort, high fidelity and long battery life, which has since been doing extremely well and (at the time of writing this post) has already tripled its mark! 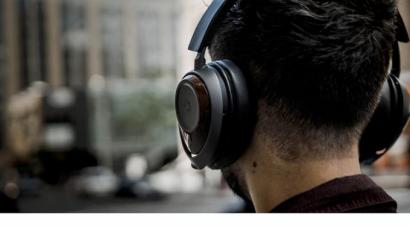 The product is regarded as the first commercial audio product to use graphene, and is now available at the "early bird" price of $199 (retail price should be $499). The ORA Headphones feature GrapheneQ membranes for excellent tonality and superior dampening, high efficiency drivers for extended battery life, touchpad controls to skip songs, control volume and answer calls, high quality built-in microphone for hands-free calling, and ear-shaped design optimized for fit and ergonomics.

We at Graphene-Info had a few questions for ORA, which they were kind enough to answer. The first one regarded the origin of the GO material used in their product; ORA shared that it is working with several Graphene Oxide suppliers to determine which supplier’s product works best for their deposition process. In general they look for large flake, low dispersion GO with a controlled oxidation state and without any residue from the Hummers method.

Our other main interest involved ORA's competition - while ORA's headphones are referred to as "the first commercial audio product to use graphene", there are still other companies with the same claim on the market. ORA commented that there is a lot of interesting research around graphene-enhanced audio equipment, but it has not left the lab yet. In addition, ORA's technology is unique in its focuses on dynamic loudspeakers - the vast majority of loudspeakers in use today are moving coil dynamic speakers making ORA's technology compatible with current product designs.

ORA further shared that there have been several Chinese companies that claim the use of graphene in their headphones (like Xiaomi and FiiO), but many of these companies are rebranding transducers from one main manufacturer and also, the nature of the use of graphene in these products is unclear. Not enough specifications or research have been published by these companies. In contrast, ORA is engaged with major audio manufacturers, cell phone manufacturers, and hearing aid manufacturers with a technology that has been validated by third party labs and with published results about the tangible performance improvements its material can bring to the loudspeaker industry.

Graphene-based Audio applications are a popular area of research focus. The earliest research we covered was in 2011 when researchers from Korea developed a transparent speaker made from Graphene. In 2013 graphene-based speaker that can outperform the best commercially-available earphones was demonstrated. Recently several companies have also released graphene-enhanced earphones, like the aforementioned Xiaomi and Fiio. In addition, Israeli audio pioneer Waves Audio is developing an innovative electrostatic speaker using a nanoscale active membrane based on graphene.