Scientists from Vanderbilt University recently developed a lightweight and ultra-compact graphene-based filter that can block aerosolized nanoparticles of size in the sub-20 nm range.

The researchers in this work have put a nature-inspired spin on the fabrication of high-performance graphene membranes for tricky oil/water separations even in stable emulsions. They demonstrated graphene nanomesh membranes within a wide pH range at impressive water permeance (close to 4000 L m2 h1 bar1) under a very low trans-membrane pressure difference.

Watercycle Technologies, a spin-out company from The University of Manchester, has secured initial funding for its technology that uses graphene-based membranes and systems to extract lithium and other minerals from brines and water solutions.

Led by Sebastian Leaper, a former PhD student from the Department of Materials at Manchester, Watercycle Technologies has taken Tier 2 membership of the Graphene Engineering Innovation Centre (GEIC), with lab space and access to advanced 2D materials facilities and expertise in prototyping.

Researchers at the Institute of Modern Physics (IMP) of the Chinese Academy of Sciences (CAS), in collaboration with teams from China's Lanzhou University and Hebei University, have developed a graphene oxide-based method of pre-enriching uranium in seawater by membrane filtration. 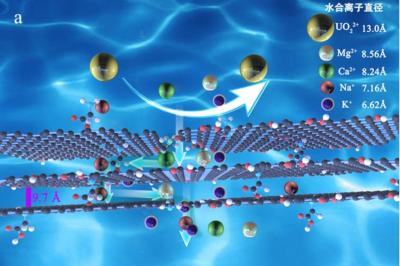 In their study, the scientists fabricated a new type of glycine cross-linked composite graphene oxide (GO-Gly) membrane with good ion sieving properties, which can meet the demands of uranium pre-enrichment in seawater.

A team of researchers from TU Delft, led by dr. Farbod Alijani, recently managed to capture the low-level noise of a single bacterium using graphene.

Being able to pick up on the miniscule sounds of bacteria can help track if an antibiotics is working, or if the bacteria are resistant to the antibiotic. Alijani's team was originally looking into the fundamentals of the mechanics of graphene, but at a certain point they wondered what would happen if it comes into contact with a single biological object.

Over the last five years, NematiQ has developed a patented, layer-by-layer methodology to produce the graphene membrane. NematiQ has achieved a milestone by producing more than 1,000 meters worth of 1,000-millimetre-wide flat sheet graphene membrane, at speed, on an industrial roll-to-roll coating machine, showcasing its ability to manufacture graphene membrane at a commercial scale.

A team of researchers, led by Professor Sir Andre Geim at The University of Manchester, in collaboration with scientists from Belgium and China, used low-energy electrons to make individual atomic-scale holes in suspended graphene. The holes came in sizes down to about two angstroms, smaller than even the smallest atoms like helium and hydrogen. 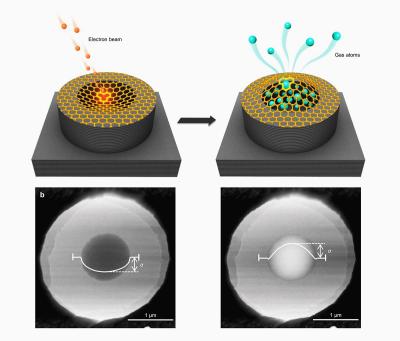 The researchers report that they achieved practically perfect selectivity (better than 99.9%) for such gases as helium or hydrogen with respect to nitrogen, methane or xenon. Also, air molecules (oxygen and nitrogen) pass through the pores easily relative to carbon dioxide, which is >95% captured.

Directa Plus has stated that its graphene technology is being used in a newly-launched high-tech range of trail shoes.

Directa Plus said a specially developed graphene membrane is integrated into the lining of the norda 001 G+ Spike high-performance trail shoes, which are now available for consumer purchase.

"The ions are so tiny, and if you want to remove them, you need to either boil, evaporate, and condense the water, or push it through membranes full of very tiny pores," explained Barati Farimani, an assistant professor of mechanical engineering at Carnegie Mellon University. The current desalination and separation process is very energy and time inefficient. To combat this, Barati Farimani and his team have used artificial intelligence (AI) agents to design an improved method in a week that would likely take decades. "Ideally," he explained, "the best membrane should be one atom thick, such as graphene, a single-layer sheet."

Environmental Systems Corporation (ESC) and Evercloak have announced a new CAD$4.6 million (around USD$3.64 million) collaborative project to build up to pilot-scale commercial production of graphene-based membranes. The project will be funded by Next Generation Manufacturing Canada (NGen) from the Ministry of Innovation, Science, and Economic Development Canada.

"This is a very exciting time for us. This collaboration represents a crucial building block towards net-zero by the year 2030 by reducing energy processes for cleanrooms. We are very excited to work with Evercloak and NGen on this initiative," said Vern Solomon, Founder/ Innovator of ESC.