Scientists at the U.S. Department of Energy’s (DOE) Argonne National Laboratory (ANL) have created a novel testbed to explore the behavior of electrons in a special class of materials called topological insulators, which could see applications in quantum computing. 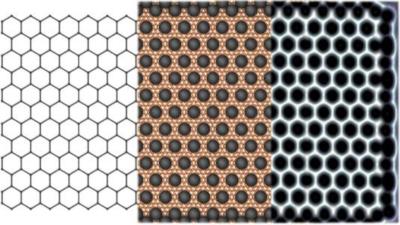 in previous work, graphene nanoribbons — small strips of graphene — were shown to exhibit promising topological states. Inspired by this, the Argonne team constructed an artificial graphene testbed with atomic precision in hopes to further explore those topological effects.

“We were able to control the appearance of topological states in our testbed,” said Argonne theoretical physicist Pierre Darancet, a lead author on the paper. ​“Our work represents a step toward exploiting topological phenomena for quantum computing”. “Making artificial graphene nanoribbons gave us more precise control over the system compared to synthesizing actual nanoribbons, which can be messy,” said Darancet. ​“It was a theorist’s dream to have experimentalists building atomic Legos atom by atom, and it allowed for greater manipulation and exploration of the topology.”

They used STM to both create and investigate the material. They also developed computer algorithms to automate construction, allowing them to operate the STM remotely. ​“I would wake up, have my coffee and then start playing with a microscope that was 30 miles away,” said Dan Trainer, who led the STM portion of the work as a postdoctoral appointee at Argonne. Using the pristine tip of the microscope, Trainer and team positioned the CO molecules, one by one, onto the copper surface in a way that confined their electrons to emulate the honeycomb structure exhibited by carbon atoms alone in a real graphene nanoribbon.

The resulting artificial nanoribbon indeed displayed the same electronic and topological properties researchers predicted would appear in the real thing.

In current electronic technologies, information is represented with ones and zeros that correspond to the presence or absence of electrons flowing in a circuit. When a material exists in a topological state as demonstrated in this study, the electrons on its surface can be described as a sort of quantum mechanical hive mind, displaying wave patterns across the material.

One can think of electrons on metal surfaces as waves in a pond, where the water organizes itself as a series of vibrations ricocheting on the lake boundaries, rather than unrelated H2O molecules. Topological states are rogue waves emerging from the complex interactions between the individual electrons on the surface.

A primary challenge in this experiment was to find the optimal spacing of the CO molecules required to lock the system’s electrons into something electronically equivalent to graphene. When the scientists achieved this precise configuration in their testbed, topological waves appeared on the copper surface. When conditions were just right, the ordinary system of particles became a spectacular electromagnetic display.

“It’s incredibly rare for an experimental system to match theoretical predictions so perfectly,” said Trainer. ​“It was really stunning.”