» Researchers design a novel method for modifying the...

An international research team from China, France, Canada, Denmark and the UK has demonstrated a novel process to modify the structure and properties of graphene. This chemical reaction, known as photocycloaddition, modifies the bonds between atoms using ultraviolet light. 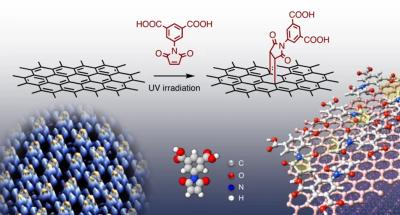 The researchers demonstrated a spatially selective photocycloaddition reaction of a two-dimensional molecular network with defect-free basal plane of single-layer graphene. The cycloaddition is triggered by ultraviolet irradiation in ultrahigh vacuum, requiring no aid of the graphene Moiré pattern. This work could open the door to designing and engineering graphene-based optoelectronic and microelectronic devices.

"No other material has properties similar to graphene, yet unlike semiconductors used in electronics, it lacks a band gap. In electronics, this gap is a space in which there are no energy levels that can be occupied by electrons. Yet it is essential for interacting with light," explains Professor Federico Rosei of INRS's Énergie Matériaux Télécommunications Research Centre.

"The multidisciplinary group of researchers from Canada, China, Denmark, France and the United Kingdom succeeded in modifying graphene so as to create a band gap. Current research is rather fundamental but could have repercussions over the next few years in optoelectronics, such as in the fabrication of photodetectors or in the field of solar energy. These include the manufacture of high-performance photovoltaic cells for converting solar energy into electricity, or the field of nanoelectronics, for the extreme miniaturization of devices," says Professor Rosei.