Researchers at Tokyo Institute of Technology (Tokyo Tech) and Toshiba Corporation recently demonstrated how graphene-based olfactory sensors could detect odor molecules depending on the design of peptide sequences. They showed that graphene field-effect transistors (GFETs) functionalized with designable peptides could be utilized to develop electronic devices that imitate olfactory receptors and then emulate the sense of smell by selectively detecting odor molecules. 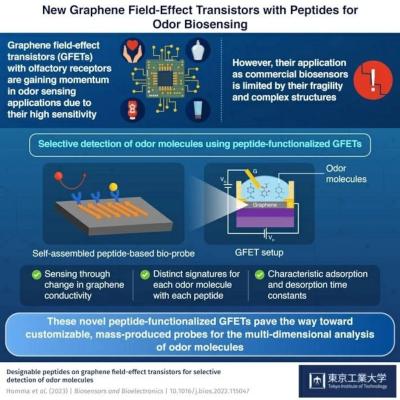 Olfactory sensing is an integral part of many industries like food, cosmetics, healthcare, and environmental monitoring. Currently, most commonly utilized methods for detecting and evaluating odor molecules is called gas chromatography–mass spectrometry (GC–MS). While GC–MS is effective, it has certain limitations like confined sensitivity and heavy setup. As a result, researchers are in the search of user-friendly and highly sensitive alternatives.

In the past few years, graphene field-effect transistors (GFETs) have started being used to come up with highly sensitive and selective odor sensors. This was done by combining with olfactory receptors, also called electronic noses.

GFETs are considered perfect for adsorbing odor molecules thanks to the high electron mobility of graphene surfaces and atomically flat surfaces. However, the application of GFETs as electrical biosensors with the receptors has extreme limitations by factors such as the delicacy of receptors and the lack of alternate synthetic molecules that can serve as olfactory receptors.

The research group from the Tokyo Institute of Technology (Tokyo Tech), headed by Professor Yuhei Hayamizu, set out to tackle problems with GFET-based olfactory receptors. Three new peptides for graphene biosensors that have the potential to detect odor molecules were developed and designed by the team.

Atomic force microscopy was used by the research group, which showed that the peptides evenly covered the graphene surface with a single-molecule thickness. Then, the functionalized graphene was utilized to construct a GFET setup for the odor molecules to be detected.

Following the assembly, the team injected menthol, limonene, and methyl salicylate as GFET’s odor molecules. The electrochemical measurements showed that binding with the odor molecules helped decrease the conductivity of the graphene.

Also, the observations disclosed that the interaction between the three peptide sequences and the odor molecule increased to highly diverse signatures. This verified that the GFET’s response to the odor molecules relied on the design of the peptide.

Moreover, the group performed real-time electrical measurements to track the kinetic response of the GFET. The observations showed that the time constraint linked to the adsorption and desorption of odor molecules was known to be special for every peptide sequence.

Furthermore, this behavior was verified by principal component analysis. Such observations verified that the new GFET setup was successful in the electrical detection of the odor molecules using designed peptides.

"Our approach is simple and can be scaled up for mass production of peptide-based olfactory receptors that can mimic and miniaturize the natural protein receptors responsible for our sense of smell. We are a step closer to realizing the concept of electronic noses",  said Yuhei Hayamizu, Professor, Tokyo Institute of Technology.

The results of this study set the stage for the development of highly sensitive and selective GFET-based odor-sensing systems. Also, the insights could be utilized while developing advanced peptide sensors that perform multi-dimensional analysis of a variety of odor molecules.