A team of researchers from the University of Pittsburgh have developed a graphene-based "artificial synapse" that does not process information like a digital computer but rather mimics the analog way the human brain completes tasks. The synapse reportedly demonstrated excellent energy efficiency comparable to biological synapses. 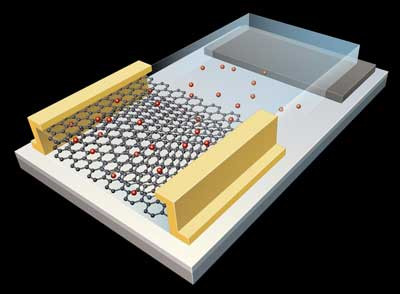 "The analog nature and massive parallelism of the brain are partly why humans can outperform even the most powerful computers when it comes to higher order cognitive functions such as voice recognition or pattern recognition in complex and varied data sets," explains Dr. Xiong, author of the study.

An emerging field called "neuromorphic computing" focuses on the design of computational hardware inspired by the human brain. Graphene's conductive properties allowed the researchers to finely tune its electrical conductance, which is the strength of the synaptic connection or the synaptic weight.

In the recent resurgence of artificial intelligence, computers can already replicate the brain in certain ways, but it takes about a dozen digital devices to mimic one analog synapse. The human brain has hundreds of trillions of synapses for transmitting information, so building a brain with digital devices is seemingly impossible, or at the very least, not scalable. Xiong Lab's approach provides a possible route for the hardware implementation of large-scale artificial neural networks.

According to Dr. Xiong, artificial neural networks based on the current CMOS (complementary metal-oxide semiconductor) technology will always have limited functionality in terms of energy efficiency, scalability, and packing density. "It is really important we develop new device concepts for synaptic electronics that are analog in nature, energy-efficient, scalable, and suitable for large-scale integrations," he says. "Our graphene synapse seems to check all the boxes on these requirements so far."

"By empowering even a rudimentary level of intelligence in wearable electronics and sensors, we can track our health with smart sensors, provide preventive care and timely diagnostics, monitor plants growth and identify possible pest issues, and regulate and optimize the manufacturing process--significantly improving the overall productivity and quality of life in our society," Dr. Xiong says.

The development of an artificial brain that functions like the analog human brain is not quite feasible yet, and would require a number of breakthroughs. Researchers need to find the right configurations to optimize these new artificial synapses. They will need to make them compatible with an array of other devices to form neural networks, and they will need to ensure that all of the artificial synapses in a large-scale neural network behave in the same exact manner. Despite the challenges, Dr. Xiong says he's optimistic about the direction they're headed.