Physicists from the Moscow Institute of Physics and Technology and the Institute for High Pressure Physics of the Russian Academy of Sciences have set out to refine the melting curve of graphite using computer modeling, and made interesting observations on graphene's melting properties.

The team'a results show that the liquid carbon structure undergoes changes above the melting curve of graphene. The researchers explain that no graphene melting experiments have been conducted. Previously, computer models predicted the melting point of graphene at 4,500 or 4,900 K. Two-dimensional carbon was therefore considered to have the highest melting point in the world.

Past studies by various research groups around the world were able to demonstrate origami-like folding of graphite with a scanning probe, but could not command where or how the folds would occur. Now, by replacing the graphite with high-quality graphene nanoislands, researchers in China and the US have leveraged the atomic-level control of STM into an origami nanofabrication tool with an impressive level of precision. 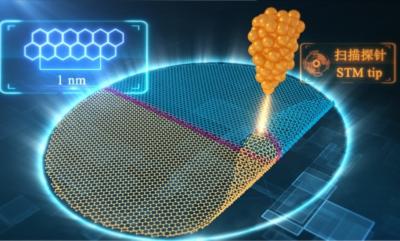 Similar to conventional paper origami, our current work has made it possible to create new complex nanostructures by custom-design folding of atomic layer materials, says Hong-Jun Gao, a researcher at the Chinese Academy of Sciences (CAS) who led this latest work. Alongside Shixuan Du and collaborators at CAS, as well as Vanderbilt University and the University of Maryland in the U.S, Gao reports how they can fold single layers of graphene with the direction of the fold specified over a range from around the magic angle at 1.1° (where observations of correlated electron behavior have been causing such a stir) to 60°, with a precision of 0.1°. Their STM manipulations also leave tubular structures at the edges that have one-dimensional structure electron characteristics similar to carbon nanotubes.

Elcora Advanced Materials has announced it has entered into a research and development agreement with Solargise Canada, a solar manufacturing and utility-scale power project development company.

The scope of work of the research and development agreement includes the development of new technologies using graphite and graphene to improve and augment the efficiency of the solar photovoltaic panels manufactured by Solargise.

Leading Edge Materials has reported the signing of a non-binding Letter of Intent with Swedish company Graphmatech. The LOI defines a pathway to form a binding Joint Venture between the companies to produce graphene at Leading Edge Material's Woxna graphite mine.

Leading Edge Materials and Graphmatech have independently produced graphene as proof of concept from Woxna graphite. Following additional research, the Joint Venture envisages co-investment in the scale up of graphene production using Woxna graphite, to supply both Graphmatech and third parties should surplus material be available. It is anticipated that the Woxna mine site will be the operating location, using proprietary graphite pre-treatment and exfoliation technology from Graphmatech.

Scientists in Spain and Italy have developed a new approach for making few-layer graphene using a mechanochemical technique that exfoliates graphite with carbohydrates. This method could pose a "greener" alternative to the common method that involves exfoliating graphite using sonication that requires the use of toxic solvents.

A major drawback of using graphene for biological applications is its poor stability in aqueous systems. "Graphene is a strongly hydrophobic material, which aggregates in water and precipitates. To study graphene in biological media, it needs to be dispersed in aqueous solutions, without the use of toxic detergents" explains Ester VÃ¡zquez from the University of Castilla-La Mancha, Spain. Now, VÃ¡zquez’s team has devised a new environmentally-friendly method for making graphene that could also make it easier to investigate in biological studies.

Researchers at Chalmers University of Technology in Sweden, have developed a graphene assembled film that has over 60% higher thermal conductivity than graphite film despite the fact that graphite consists of many layers of graphene. The graphene film shows great potential as a novel heat spreading material for form-factor driven electronics and other high power-driven systems. The IP of the high-quality manufacturing process for the graphene film belongs to SHT Smart High Tech AB, a spin-off company from Chalmers, which is going to focus on the commercialization of the technology.

Until now, many scientists in the graphene research community have assumed that graphene assembled film cannot have higher thermal conductivity than graphite film. Single layer graphene has a thermal conductivity between 3500 and 5000 W/mK. If you put several graphene layers together, then it theoretically becomes graphite.

Australia-based advanced materials company Talga Resources has reported high levels of electrical conductivity in concrete by using an additive developed from the Company’s graphene-graphite research and development laboratory in the UK.

Wounds in diabetic patients do not heal as rapidly as it would in a normal and healthy individual, which leads to chronic non-healing wounds that can result in serious complications. Treatment of such chronic non-healing wounds in diabetes is still a major clinical challenge. Although there are some wound dressings that are commercially available, they are very expensive.

U.S-based startup Urbix Resources has announced closing its Series A round of financing with an oversubscribed commitment of $3.5 million USD. The Company states that in addition to current investors and management, this round included an international investment from a management company based in Mexico.

It was gratifying to find ourselves in a position where our funding objectives were oversubscribed, comments Executive Chairman Nico Cuevas. This allows us to focus on our main initiatives including the construction of our low-cost/clean tech pilot purification facility and the construction of our proprietary pristine graphene reactor. This leads us to our goal of bringing graphene at a commercial scale to the market at about $1 per gram.