Researchers from The University of Texas at Austin and Sandia National Laboratories have developed graphene-based synaptic transistors for brain-like computers. These transistors are similar to synapses in the brain, that connect neurons to each other.

"Computers that think like brains can do so much more than today's devices," said Jean Anne Incorvia, an assistant professor at The University of Texas at Austin and the lead author on the paper. "And by mimicking synapses, we can teach these devices to learn on the fly, without requiring huge training methods that take up so much power."

Most graphene-based electronic devices require insulating supports. Yet, high-quality graphene films destined for industrial use are typically grown on a metal substrate, such as copper foil, before being transferred to an insulating support for device fabrication. This transfer step can introduce impurities that affect how well the device performs. Efforts to grow graphene on insulating supports have thus not been successful in producing the required high-quality single crystals.

Archer Materials has announced a milestone in the development of its biochip, which is being created to detect various deadly communicable diseases.

INBRAIN Neuroelectronics has signed an agreement for the exploitation and development of three patents and a trade secret, mainly held by the Institute of Microelectronics of Barcelona (IMB-CNM) of the Spanish Council for Scientific Research (CSIC), the Catalan Institute of Nanoscience and Nanotechnology (ICN2), the InstituciÃ³ Catalana de Recerca i Estudis AvanÃ§ats (ICREA) and the Biomedical Research Centre Network CIBER BBN. The Universitat AutÃ³noma de Barcelona (UAB) and the Institut de Investigacions BiomÃ¨diques August Pi i Sunyer (IDIBAPS) are also co-owners of the patents. This is a successful process of technology transfer in a public-private collaboration with multiple research institutions.

The company will carry out the development and manufacturing of these technologies within the Institut CatalÃ  de NanociÃ¨ncia i Nanotecnologia (ICN2) and the Micro and Nanofabrication Clean Room of the Institute of Microelectronics of Barcelona (IMB-CNM) of the CSIC.

Researchers from China's Tsinghua University and East China Normal University have created a transistor with the smallest gate length ever reported. This milestone was made possible by using graphene and molybdenum disulfide and stacking them into a staircase-like structure with two steps. 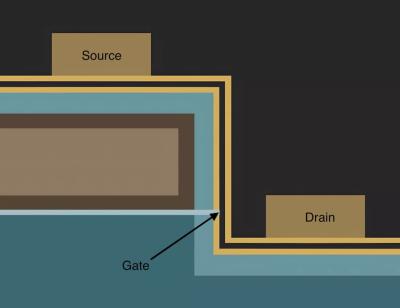 The structure of the side-wall transistor: Silicon dioxide base (dark blue), aluminum covered in aluminum oxide (brown ), the thin, light blue strip is graphene, the yellow and black strip is molybdenum disulfide, and underneath it, the hafnium dioxide.

On the higher step, there is the source, and on top of the lower step, there is the drain. Both are made of a titanium palladium alloy separated by the surface of the stairs, which is made of a single sheet of a molybdenum disulfide (MoS2), itself resting on a layer of hafnium dioxide that acts as an electrical insulator. 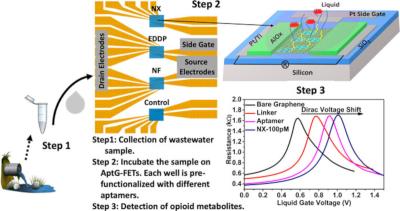 The novel device uses graphene-based field effect transistors to detect four different synthetic and natural opioids at once, while shielding them from wastewater’s harsh elements. When a specific opioid metabolite attaches to a molecular probe on the graphene, it changes the electrical charge on the graphene. These signals are easily read electronically for each probe attached to the device.

Researchers the UK and Spain have demonstrated that tiny graphene neural probes can be used safely to improve our understanding of the causes of epilepsy.

The graphene depth neural probe (gDNP) consists of a millimeter-long linear array of micro-transistors imbedded in a micrometer-thin polymeric flexible substrate. The transistors were developed by a collaboration between The University of Manchester’s Neuromedicine Lab and UCL’s Institute of Neurology along with their Graphene Flagship partners.

A team of researchers from universities in Loughborough, Nottingham, Manchester, Lancaster and Kansas (US) has revealed that sonic boom and Doppler-shifted sound waves can be created in a graphene transistor.

When a police car speeds past you with its siren blaring, you hear a distinct change in the frequency of the siren’s noise. This is the Doppler effect. When a jet aircraft’s speed exceeds the speed of sound (about 760 mph), the pressure it exerts upon the air produces a shock wave which can be heard as a loud supersonic boom or thunderclap. This is the Mach effect. The scientists discovered that a quantum mechanical version of these phenomena occurs in an electronic transistor made from high-purity graphene.

Karlsruhe Institute Of Technology (KIT) and Technical University of Darmstadt researchers have developed graphene-enhanced sensors for molecules in the gas phase. The functional principle of this new type of sensors is based on sensitive graphene transistors and tailor-made organometallic coatings. This combination enables selective detection of molecules. 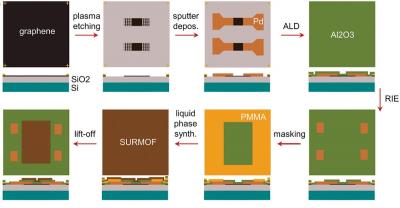 As a prototype, the authors of the new study demonstrated a specific ethanol sensor that, unlike currently available commercial sensors, does not react to other alcohols or moisture.

A team of researchers, led by Director Rod Ruoff at the Center for Multidimensional Carbon Materials (CMCM) within the Institute for Basic Science (IBS) and including graduate students at the Ulsan National Institute of Science and Technology (UNIST), has achieved growth and characterization of large area, single-crystal graphene totally free from wrinkles, folds, or adlayers. It was said to be 'the most perfect graphene that has been grown and characterized, to date'.

Director Ruoff notes: This pioneering breakthrough was due to many contributing factors, including human ingenuity and the ability of the CMCM researchers to reproducibly make large-area single-crystal Cu-Ni(111) foils, on which the graphene was grown by chemical vapor deposition (CVD) using a mixture of ethylene with hydrogen in a stream of argon gas. Student Meihui Wang, Dr. Ming Huang, and Dr. Da Luo along with Ruoff undertook a series of experiments of growing single-crystal and single-layer graphene on such ‘home-made’ Cu-Ni(111) foils under different temperatures.