» Understanding graphene/GaN and other 2D/3D interfaces...

Researchers from the Nagoya Institute of Technology (NITech) in Japan have developed a method to examine the connections between two-dimensional layers of atoms and semiconductors, which could prove useful in the future for ensuring the performance of next-gen electronics. 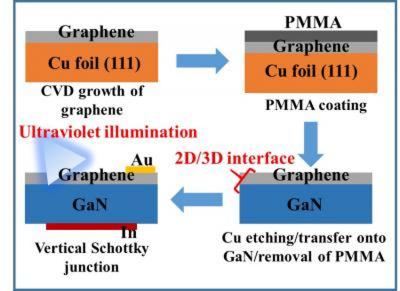 According to Golap Kalita Ph.D., an associate professor at NITech, understanding GaN heterojunction devices and how to improve them is critical for better device performance. "Our team found a way to determine the interface properties of the graphene and gallium nitride heterojunction by characterizing the device under ultraviolet illumination," Kalita said.

The interface between the graphene and the gallium nitride should be free of impurities, especially ones that gain energy from light. When the researchers shined ultraviolet (UV) light on the heterojunction device, they found photo-excited electrons (excitons) trapped at the interface and interfering with the transfer of information.

The gallium nitride contains surface-level defects and other imperfections that allow such photo-excited electrons to become trapped at the interface. "We found that the interface states of graphene and gallium nitride have a significant influence on the junction behavior and device properties," said Kalita.

However, when the researchers applied a more refined layer of graphene to gallium nitride, they didn't see any hysteresis effect without light illumination, implying a cleaner match at the interface. But it wasn't perfect - UV illumination instigated the photo-excited electrons into a frenzy behavior due to inherent defects in gallium nitride.

"This finding showed that the graphene/GaN heterojunction interface can be evaluated by the ultraviolet illumination process," Kalita said.

"This study will open up new possibilities to characterize other heterojunction interfaces by an ultraviolet light illumination process," Kalita said. "Ultimately, our goal is to understand interface of various two- and three-dimensional heterostructures to develop novel optoelectronic devices with graphene."