In order for CVD graphene to be used in its intended application, it needs to be transferred from the growth substrate to a target substrate a challenging but extremely important process step. Typically the transfer is done by spin-coating a supporting polymer layer and then chemically dissolving away the copper to release the graphene film from the substrate. The transferred graphene produced in this way is prone to contamination from the chemical agents used to remove the growth substrate as well as defective amorphous carbon generated during the high-temperature CVD growth. It also frequently leads to a substantial amount of polymer particle residue on the graphene generated during the transfer process. A third source of contamination could be airborne particles that are adsorbed onto the graphene surface. 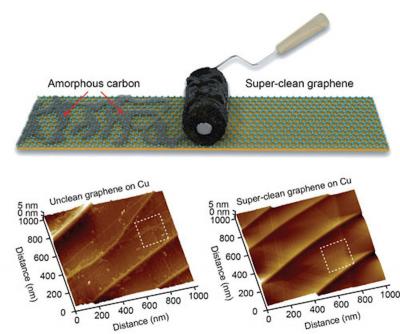 "During the last few years, many efforts have been made to remove surface contaminants from graphene surfaces, which, however, just focused on the removal of the transfer-related polymer residues," said Luzhao Sun from Peking University's Center for Nanochemistry, and the paper's first author. "To address this issue, we developed and demonstrated an activated carbon-coated lint roller with a strong adhesive force to successfully remove surface contaminants from graphene. A graphene surface treated with this lint roller exhibits a high cleanliness of 99% with a low degree of polymer residue after transfer onto a functional substrate."

Inspired by the common household lint roller composed of one-sided adhesive paper that interacts strongly with targeted contaminants such as lint on a fabric the team fabricated an activated carbon-coated roller to treat the graphene/copper foil. This approach relies on the strong interaction between the activated carbon and amorphous carbon present on the graphene.

"We used a binder to coat activated carbon powder on micrometer-sized pores of commercially available copper foam to achieve a high mass loading of activated carbon," Sun explains the device fabrication. "We then conducted the cleaning process of large-area of graphene on copper foil by slowly rolling the foil directly under the activated carbon-coated lint roller at a temperature of no more than 170 °C."

As the researchers demonstrated in their paper, this lint rolling post-treatment results in large-area (meter-scale) superclean graphene surfaces enabled by the strong adhesive force of the activated-carbon-based lint roller on graphene contaminants.

"Applying our lint roller resulted in graphene with surface cleanness exceeding 99%, that can be transferred to dielectric substrates with significantly reduced polymer residues," Sun notes. "In our experiments, the cleaned graphene yielded ultrahigh carrier mobility of 500 000 cm2 V-1 s-1 and low contact resistance of 118 Î© µm, which is comparable with that of exfoliated graphene."

He points out that the extremely low contact resistance and ultrahigh carrier mobility of superclean graphene would satisfy the requirement of high speed electronics including radio-frequency transistors, Dirac-source field-effect transistors; high-speed optoelectronics such as photodetectors and optical modulators; and epitaxy III-V semiconductors for lighting LED or lasers.

Furthermore, superclean graphene provides an ideal platform to study its intrinsic properties such as in electrocatalysis or electrochemical systems.

The synthesis of superclean graphene, as demonstrated by this work, is merely one important step towards the kind of high-quality graphene that is needed for many practical applications. But that alone is not enough: defects, steps, wrinkles and grain boundaries are also important aspects that influence the performance of graphene and they all need to be addressed in order to achieve high-quality graphene film.