Scientists from Columbia University have reportedly proven a 30-year-old theory called "the even-denominator fractional quantum Hall state" and established bilayer graphene as a promising platform that could lead to quantum computation. 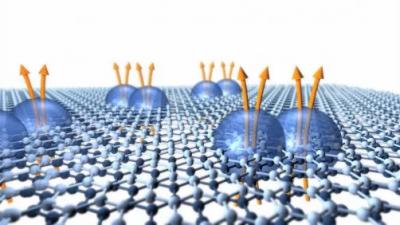 The team observed an intensely studied anomaly in condensed matter physicsâthe even-denominator fractional quantum Hall (FQH) stateâvia transport measurement in bilayer graphene. Observing the 5/2 state in any system is a remarkable scientific opportunity, since it encompasses some of the most perplexing concepts in modern condensed matter physics, such as emergence, quasi-particle formation, quantization, and even superconductivity, the team says. Our observation that, in bilayer graphene, the 5/2 state survives to much higher temperatures than previously thought possible not only allows us to study this phenomenon in new ways, but also shifts our view of the FQH state from being largely a scientific curiosity to now having great potential for real-world applications, particularly in quantum computing.

First discovered in the 1980s in gallium arsenide (GaAs) heterostructures, the 5/2 fractional quantum hall state remains the singular exception to the otherwise strict rule that says fractional quantum hall states can only exist with odd denominators. Soon after the discovery, theoretical work suggested that this state could represent an exotic type of superconductor, notable in part for the possibility that such a phase could enable a fundamentally new approach to quantum computation. However, confirmation of these theories has remained elusive, largely due to the fragile nature of the state; in GaAs it is observable only in the highest quality samples and even then appearing only at milikelvin temperaures (as much as 10,000 times colder than the freezing point of water).

The Columbia team has observed this same state in bilayer graphene and appearing at much higher temperatures - reaching several Kelvin. While it’s still 100 times colder than the freezing point of water, seeing the even-denominator state at these temperatures opens the door to a whole new suite of experimental tools that previously were unthinkable, says the team. After several decades of effort by researchers all over the world, we may finally be close to solving the mystery of the 5/2.

We needed a new platform, say the researchers. With the successful isolation of graphene, these atomically thin layers of carbon atoms emerged as a promising platform for the study of electrons in 2D in general. One of the keys is that electrons in graphene interact even more strongly than in conventional 2D electron systems, theoretically making effects such as the even-denominator state even more robust. But while there have been predictions that bilayer graphene could host the long-sought even-denominator states, at higher temperatures than seen before, these predictions have not been realized due mostly the difficulty of making graphene clean enough.

The Columbia team managed to improve the quality of graphene devices, creating ultra-clean devices entirely from atomically flat 2D materials: bilayer graphene for the conducting channel, hexagonal boron nitride as a protective insulator, and graphite used for electrical connections and as a conductive gate to change the charge carrier density in the channel. A crucial component of the research was having access to the high magnetic fields tools available at the National High Magnetic Field Laboratory in Tallahassee, Fla., a nationally funded user facility with which Hone and Dean have had extensive collaborations. They studied the electrical conduction through their devices under magnetic fields up to 34 Tesla, and achieved clear observation of the even-denominator states.

By tilting the sample with respect to the magnetic field, we were able to provide new confirmation that this FQH state has many of the properties predicted by theory, such as being spin-polarized, says the paper’s lead author. We also discovered that in bilayer graphene, this state can be manipulated in ways that are not possible in conventional materials.

The Columbia team’s result, which demonstrates measurement in transportâhow electrons flow in the systemâis a crucial step forward towards confirming the possible exotic origin of the even denominator state. Their findings are reported contemporaneously with a similar report by a research group at University of California, Santa Barbara. The UCSB study observed the even denominator state by capacitance measurement, which probes the existence of an electrical gap associated with the onset of the state.

The team expects that the robust measurements they have now observed in bilayer graphene will enable new experiments that could definitively prove its non-abelian nature. Once this is established, the team hopes to begin demonstrating computation using the even denominator state.