Researchers at Brown University have demonstrated that graphene, wrinkled and crumpled in a multi-step process, becomes significantly better at repelling water - a property that could be useful in making self-cleaning surfaces. Crumpled graphene also has enhanced electrochemical properties, which could make it more useful as electrodes in batteries and fuel cells. 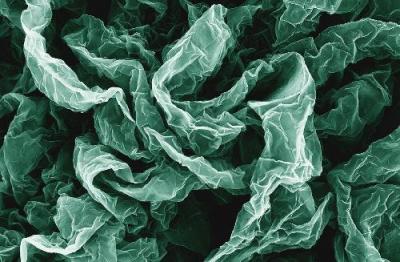 The researchers aimed to build relatively complex architectures incorporating both wrinkles and crumples. To do that, the researchers deposited layers of graphene oxide onto shrink films -polymer membranes that shrink when heated. As the films shrink, the graphene on top is compressed, causing it to wrinkle and crumple. To see what kind of structures they could create, the researchers compressed same graphene sheets multiple times. After the first shrink, the film was dissolved away, and the graphene was placed in a new film to be shrunk again.

The researchers experimented with different configurations in the successive generations of shrinking. The team found that the multi-generational approach could substantially compress the graphene sheets, making them as small as one-fortieth their original size. They also showed that successive generations could create interesting patterns along the surface-wrinkles and crumples that were superimposed onto each other, for example.

The scientists reported that the material has a 'memory' and yields different results when wrinkled or crumpled in a different order. They generated a kind of taxonomy of structures born from different shrinking configurations. They then tested several of those structures to see how they altered the properties of the graphene sheets. They showed that a highly crumpled graphene surface becomes superhydrophobic - able to resist wetting by water. When water touches a hydrophobic surface, it beads up and rolls off. When the contact angle of those water beads with an underlying surface exceeds 160 degrees - meaning very little of the water bead's surface touches the material - the material is said to be superhydrophobic. The researchers showed that they could make superhydrophobic graphene with three unclamped shrinks.

The team also showed that crumpling could enhance the electrochemical behaviors of graphene, which could be useful in next-generation energy storage and generation. The research showed that crumpled graphene used as a battery electrode had as much as a 400% increase in electrochemical current density over flat graphene sheets. That increase in current density could make for vastly more efficient batteries. In addition to batteries and water resistant coatings, graphene compressed in this manner might also be useful in stretchable electronics.

The group plans to continue experimenting with different ways of generating structures on graphene and other nanomaterials.

In April 2015, Brown University researchers developed a method of creating environments on which to culture cells using graphene, that relies on a technique that makes small wrinkles in graphene sheets. In that same month, researchers at the University of Illinois designed a single-step method of creating textures in graphene ("crumpling") to allow for larger surface areas, thus tapping into graphene's benefits for electronics.