Researchers from the Laboratory of Nanooptics and Plasmonics, Moscow Institute of Physics and Technology (MIPT) in Russia have devised a graphene oxide-based biosensor with the potential of significantly speeding up the process of drug development. Graphene helps to improve the sensor's sensitivity, which in the future may enable the development of new drugs and vaccines against many dangerous diseases like HIV, hepatitis and cancer. 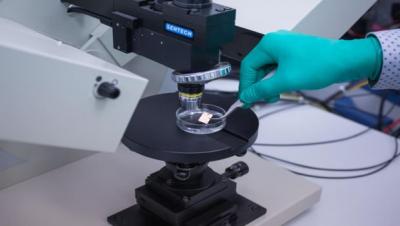 The GO-based biosensors exploit the phenomenon of surface plasmon resonance (SPR). Surface plasmons are electromagnetic waves propagating along a metal-dielectric interface (like gold/air) and having the amplitudes exponentially decaying in the neighbor media. Adsorption of molecules from solution onto a sensing surface alters the refractive index of the medium near this surface and, therefore, changes the conditions of SPR. These sensors can detect biomolecule adsorption even at a few trillionth of a gram per millimeter square. Thanks to these merits, SPR biosensing is an outstanding platform to boost technological progress in the areas of medicine and biotechnology. Nevertheless, the most distinctive feature of such sensors is an ability to "visualize" molecular interactions in real time. Researchers believe that the introduction of this method into preclinical trials, for example, can completely change the pharmaceutical industry.

Most commercial SPR sensor chips comprise a thin glass plate covered by gold layer with thiol or polymer layers on it. The biosensing sensitivity depends on the properties of the chip's surface. Higher binding capacity for biomolecules increases the signal levels and accuracy of analysis. The researchers created and patented a novel type of SPR sensor chips with the linking layer made of GO. The GO "flakes" were deposited on the 35 nm gold layer, and then a layer of streptavidin protein was developed on the GO for selective immobilization of biomolecules.

A comparative series of experiments with the GO chip, the commercially available chip with carboxymethylated dextran (CMD) layer and the chip covered by monolayer graphene, showed that the proposed GO chip has three times higher sensitivity than the CMD chip and 3.7 times than the chip with pristine graphene. These results show that the new chip needs much less molecules for detecting a compound and can be used for analysis of chemical reactions with small drug molecules. An important advantage of the new GO based sensor chips is their simplicity and low-cost fabrication compared to sensor chips that are already commercially available.