Graphene is probably the most hyped material of the past decade, but so far commercial applications have been limited. Graphene is mostly used as an additive inside composites and plastics to enhance their thermal or structural properties. In the most recent high profile case, Huawei announced the integration of a passive graphene cooling film to improve heat management inside one of their smartphones. While this is a useful use of graphene, it is a far cry from the disruptive electronics that were promised when the material was first isolated.

It is worth considering that both investments and patent filings in graphene peaked in 2015. Nearly four years later, we can expect to see some of these to start paying off with some product launches.

Earlier this year I attended the Graphene Commercialization conference hosted by Cranfield University. Most people agreed that graphene-enhanced composites were currently the biggest opportunity. In the aerospace industry, these lightweight composites have the potential to make aircrafts or drones much more energy efficient. However, graphene is also seen as a promising material to address the limitations of existing Li-ion batteries of electric aircrafts. “The energy density barrier needs to be broken”, said Benoit Gauthier from Airbus. In his talk, he also envisioned using graphene to recycle water during long flights. 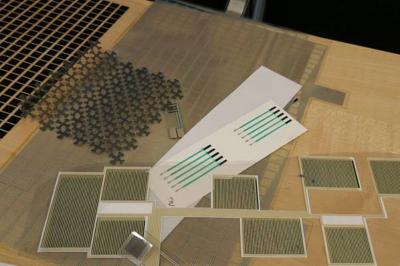 At the same conference I discussed the potential applications in printed and flexible electronics. Unfortunately, the lack of standardization for graphene has resulted in a confusing offering from the industry, with many formulations exhibiting low electrical conductivity. As the market for flexible OLED displays is taking off, graphene is still seen as an underperforming material for components such as touch sensors.

There are opportunities in other segments of flexible electronics, such as e-textiles or chemical sensors. For instance, Haydale has already demonstrated that graphene could replace carbon electrodes in biosensors. Novelinks, a newly formed spin-out from the Warsaw University of Technology, has developed a graphene ink for researchers designing new electrochemical sensors. However, it might take some time before we see commercial devices printed with graphene.

Several British start-up companies I have talked to are working on advanced electronics with the highest possible quality of graphene. To do this, they rely on graphene grown on wafers instead of graphene inks or paste.

Iceni Labs is a spin-out from Imperial College London developing a graphene-based microphone. Compared to the MEMS microphones currently manufactured by the semiconductor industry the new device will have a flatter frequency response and a smaller size. The company uses very thin graphene membranes made by a process called chemical vapor deposition (CVD). Iceni Labs have started a joint venture with Silson, a supplier of CVD graphene. 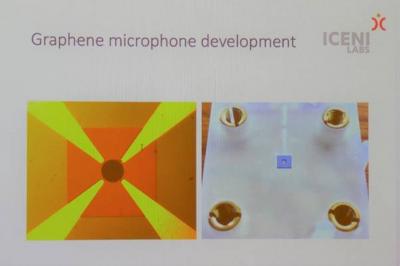 Microphone based on a graphene membrane

In Cambridge, the R&D team at Emberion is preparing the launch of the first graphene image sensor.

Emberion is an independent spin-out company from Nokia developing infrared and thermal detectors. Their technology is based on an array of graphene transistors that can amplify a sensor signal with minimal noise. The company works with CVD graphene which is then transferred to a custom designed CMOS circuit to make the transistors.

Their first generation of products will be VIS-SWIR detectors (wavelength 400-1800nm) that offer performance on par with conventional InGaAs infrared sensors at a lower cost. These can be used for spectroscopy, machine vision, and hyperspectral imaging. The first model, a linear detector (512 × 1 resolution) running at 100 fps will be available in June 2019, followed by a VGA detector (640 × 512 resolution) later in 2019. Emberion also plans to make bolometers for thermal imaging or gas sensing.

Another Cambridge company is commercializing a technology that should make it easier to integrate graphene into electronic devices. Founded in 2017, Paragraf has currently 16 employees and recently raised £2.9 million ($3.9 million) in seed funding. The spin-out from the University of Cambridge uses a proprietary process to grow uniform graphene on various types and sizes of wafers.

Paragraf will be working with commercial partners to develop devices based on their graphene. The company is currently exploring potential applications in high precision position sensors and in photovoltaics. They have an on-going collaboration with Verditek to enable lightweight high-efficiency solar cells.

Dr Guillaume Chansin is the founder and principal consultant at Irimitech Consulting. He has been following emerging materials and devices since 2012 and has been a speaker at major industry events on flexible electronics, displays, and sensors.