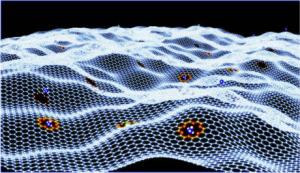 Ethers are simple organic molecules in which an oxygen atom connects two carbon atoms. Ethers are the building blocks of common products like propellants, solvents, pharmaceuticals and cosmetics. When ethers are linked together in the form of large molecular rings, they form crown ether molecules, which are of great scientific significance as the initial prototype in host–guest chemistry, a promising field for applications like sensors and separators.

Graphene's honeycomb structure forces crown ethers that are incorporated into it to be flat, resulting in rigid holes that optimize selectivity for atom sizes that fit the ring cavities. In addition, restricting the crown ethers causes their oxygen dipoles to be inward-facing towards the cavity centres, optimizing the electrostatic potential for binding atoms. The scientists regard the results as unprecedented in this field and possibly ushering in a boosted use of ether rings.

The significant electrostatic binding can be useful for various applications, like chemical separations, sensors, nuclear waste cleanup, metal extraction, recycling and purification of elements, biotechnology, water treatment, catalysis, batteries and data storage. The selectivity feature, caused by the unique characteristics of the cavity, could hold major scientific and medical possibilities.

ORNL cientists used graphite for this study, which was oxidized to form graphene oxide and then reduced to form graphene. Carbon and the remaining oxygen formed crown ethers in the material. Then the scientists made use of electron energy loss spectroscopy and scanning transmission electron microscopy to reveal local composition, atomic position and local electronic properties in the oxidized graphene.

In February 2014, ORNL researchers, along with MIT and Saudi Arabial scientists, developed a process that creates high density pores in single sheet graphene to enable a cheaper way to create graphene membranes for water purification, desalination and other applications.