» Graphene takes on the properties of gold and cobalt to...

Scientists from St. Petersburg University and Tomsk University in Russia, along with teams at the Max Planck Institute in Germany and University of the Basque Country, Spain, have modified graphene in such a way that it has taken the properties of cobalt and gold: magnetism and spin–orbit interaction. This advance can greatly benefit quantum computers. 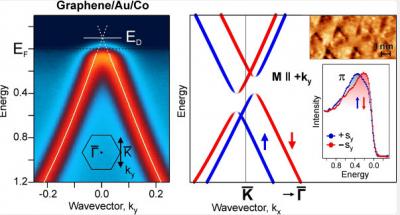 The research and preparing of materials for submission to publication took three years, said the first author of the article. The scientists synthesized and then studied a new system that comprises clearly structured graphene on the magnetic layer with ultra-thin layers of the atoms of gold between them.

The researchers are planning to study graphene to use it in spintronics that is the study of the intrinsic spin of the electron and its associated magnetic moment, in addition to its fundamental electronic charge, in solid-state devices. “Nanoelectronics, or spin-orbitonics, is at the forefront of the fundamental and applied science globally. There are new memory elements, logical elements, neuromorphic devices. They are driven by pure spin current, that is a flow of spins without accompanying a flow of electrical charges. It makes the SPbU’s study especially valuable as it opens up new horizons in using new properties of graphene in last generation of the the spin-orbit devices to increase their efficiency and effectiveness”.