» Graphenea and MIT develop sensors based on graphene and...

MIT and Graphenea have developed an array of graphene sensors for sensitive and selective detection of ammonia. The array consists of 160 graphene pixels, allowing large statistics that result in improved sensing performance. The sensors are extensively tested for various real-life operational conditions, which seems to be a step forward to practical use. 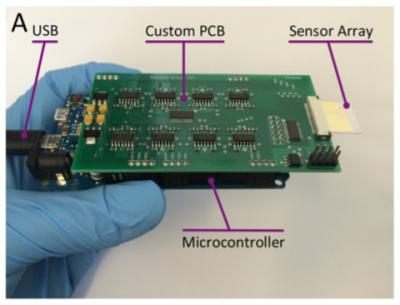 The sensors are built by attaching porphyrins, a class of organic molecules, to the graphene surface. Porphyrins are particularly well-matched to graphene sensors because they provide excellent sensitivity while producing minimal perturbation to graphene’s outstanding electrical properties. When ammonia molecules attach to porphyrins, the compound becomes a strong dipole that changes electrical properties of the graphene. This electrical change is detected as a sign of the presence of ammonia.

The graphene sensor array is designed as an insertable chip for use in conjunction with a custom readout system, which is connected to a computer via USB. Together with specialized data acquisition software, the system can perform rapid high-quality readout of data from hundreds of sensors, which is a major improvement over previous prototype graphene sensor devices. The ability to monitor a large number of sensors allows monitoring performance variations and reproducibility and subsequent improvement of sensor array performance.

Importantly, the graphene sensors are shown to be selective – they respond to ammonia but not to other molecules such as water, hexane, ethanol, chloroform, or acetonitrile. The sensor electrical properties change by as much as 8% for ammonia concentrations of 160 ppm, although concentrations as small as 20 ppm were successfully detected. These sensors are 4 times more sensitive to ammonia then pristine graphene sensors reported earlier.

Although quantification was performed in a dry nitrogen atmosphere, the specificity and sensitivity to ammonia were shown to remain even in an air environment, which enables robust performance in real use conditions. The variations in performance between sensor pixels were small, allowing reproducibility and mass production.

In 2016, researchers at the Technical University of Munich (TUM) succeeded in linking graphene with porphyrins, to form new hybrid structures that could be used in the field of molecular electronics, catalysis or as sensors.