Researchers at the University of Arkansas, led by professor Paul Thibado, have found strong evidence that the internal motion of 2D materials could be used as a source of clean, limitless energy. The team has reportedly taken the first steps toward creating a device that can turn this energy into electricity, with the potential for many applications. A patent has recently been applied on this invention, called a Vibration Energy Harvester, or VEH.

The team studied the internal movements of carbon atoms in graphene and observed two distinct features: small Brownian motion and larger, coordinated movements. In these larger movements, the entire ripple buckled, flipping up and down like a thin piece of metal being repeatedly flexed. This pattern of small random motion combined with larger sudden movements is known as Lévy flights. This phenomenon can be observed in a variety of contexts, such as biomedical signals, climate dynamics, and more. Thibado is claimed to be the first to have observed these flights spontaneously occurring in an inorganic atomic-scale system.

while other researchers have theorized that temperature-induced curvature inversion in graphene could be used as an energy source, Thibado’s work is unique thanks to his discovery that graphene has naturally occurring ripples that invert their curvature as the atoms vibrate in response to the ambient temperature. This is the key to using the motion of 2D materials as a source of harvestable energy, Thibado said. Unlike atoms in a liquid, which move in a random directions, atoms connected in a sheet of graphene move together. This means their energy can be collected using existing nanotechnology.

Such a VEH device would involve a negatively charged sheet of graphene suspended between two metal electrodes. When the graphene flips up, it induces a positive charge in the top electrode, and when it flips down, it charges the bottom one, creating an alternating current.

The pieces of graphene in Thibado’s lab measure about ten microns across, so tiny that more than 20,000 of them could fit on the head of a pin. Each Levy flight exhibited by an individual ripple measures only 10 nanometers by 10 nanometers, yet could produce 10 picowatts of power. As a result, each of these micro-sized membranes has the potential to produce enough energy to power a wristwatch, and they would never wear out or need charging. 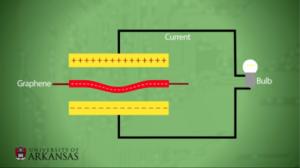 The team will also be experimenting with other 2D materials, in addition to graphene. Ironically, it was found that the superior conductivity of grapheneâa characteristic that that allows it to excel as a material for creating tiny electric circuits in other contextsâmakes it less than ideal for this purposes. His VEH device yields more energy if the active material is not conductive, because if electrons move too easily across it, this lowers its efficiency. The researchers are studying other 2D materials to determine if they could produce energy more efficiently than graphene.

A VEH technology could have significant implications on the effort to connect physical objects to the digital world, known as the Internet of Things. This self-charging, microscopic power source could make everyday objects into smart devices, as well as powering more sophisticated biomedical devices such as pace-makers, hearing aids, and wearable sensors. Self-powering enables smart bio-implants, explained Thibado, which would profoundly impact society.