» Impressions from the 2018 Graphene Week in San Sebastian

The Graphene-Info team attended this year's Graphene Week, organized by the Graphene Flagship in San Sebastian, Spain, 10-14 September 2018. The event attracted over 600 visitors from all over the world, and was extremely well organized.

While the talks and lectures were clearly scientifically-oriented, the commercial angle was also evident and many institutes and companies were there to show their recent product advancements. The Graphene Flagship's booth held a fascinating array of exhibits: graphene-enhanced retina and neural prosthesis (biomedical devices) by the ICN2 as a part of Braincom, Airbus' graphene composite for the leading edge of the tail of the Airbus A350, Nokia, Ericsson and AMO's graphene-based modulators and photodetectors for optical communications, a prosthetic robotic hand enhanced with graphene nerve sensors by the IIT, University of Cambridge's insole graphene-based pressure sensor and more.

Jari Kinaret, Director of the Graphene Flagship, gave an interesting talk on the Flagship status and plans. The Flagship consortium, which earlier in September 2018 reported that it successfully completed the Core1 phase and is progressing towards more applied phases, prepared the following status, from which it can be seen that half of the time planned for the project had passed, using only a third of the funding. Hopefully this means that the newly started phase will enjoy increased funding and thus increased results. 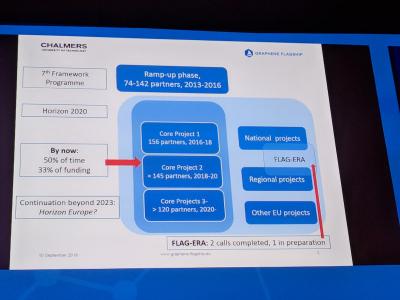 In that same talk, Professor Kinaret also detailed the application domains on which business developers will focus as part of the next phase: energy, composites, surfaces and coatings, optoelectronics and photonics, electronics, flexible and wearable applications, and biomedical applications. In addition, the Flagship's performance to this stage was assessed, using metrics like KPI, number of publications, patents, prototypes and more: 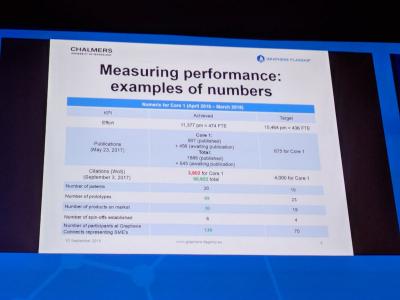 During the Graphene Week, tours were arranged at the Nanogune and Graphenea facilities, which were interesting and informative. We were quite impressed with both the staff and facilities at both venues.