Researchers in the UK (the University of Manchester) and Italy (the University of Pisa) have developed an inkjet-printed graphene strain gauge sensor on paper. The device is said to have a gauge factor of up to 125 even when very small strains are applied, and its overall sensitivity and performance can be tuned by different printing parameters, such as drop-spacing and number of printing passes. It might be used in applications like robot skin and health monitoring applications, and in smart packaging. 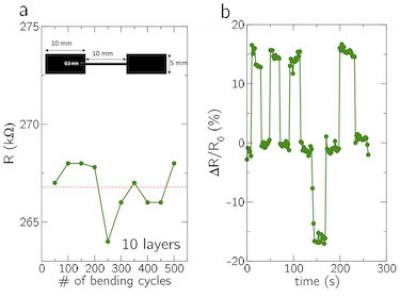 The team made their strain gauge by depositing conductive lines made from a network of graphene flakes (dispersed in water as the solvent) on a PEL P60 paper substrate using a simple Dimatix DMP-2850 inkjet printer. This printer can create and define patterns over an area of about 200 mm x 300 mm and handle substrates that are up to 25 mm thick. A waveform editor and a drop-watch camera system were used to manipulate electronic pulses to the jetting deice for optimizing the drops’ characteristics as they were ejected from the nozzle.

“We see a change in the conductivity of the lines when we apply different degrees of strain to the paper,” explains the team. “This occurs because, at the microscopic level, the different degrees of strain lead to larger (compressive) or smaller (tensile) interactions between the graphene flakes, which at the macroscopic level, translate into a change in conductivity.”

The researchers explained that they engineered their strain sensor by looking at the electrical behavior of the graphene lines under different applied strains, ϵ, and for different printing parameters – for example, the number of printing passes and the drop spacing. As expected, the larger the number of printing passes (that is, printed layers), the smaller the resistance, R, of the graphene line. The sensitivity, S, of the device increases with the number of layers and as the substrate becomes more curved. Indeed, it reaches more than 100% for a curvature of 1 cm (that is, a strain of 1.25%). The device also has a gauge factor (GF) of 125. This factor describes the change in resistance, ΔR, coming from mechanical deformation and can be expressed as GF= ΔR/R0/ϵ = S/ϵ, where R0 is the nominal resistance.

Inkjet printing allows the team to simply and quickly fabricate a sensor directly on the surface to be inspected, which opens up the possibly of introducing arrays of sensors over large areas or multi-sensing, by introducing different types of sensors in the array.