» Irish scientists find a way to make large amounts of...

Researchers at the Trinity College Dublin in Ireland discovered a method of making large quantities of black phosphorus with dimensions that can be controlled. Black phosphorus is a form of phosphorus in which phosphorus atoms form a two-dimensional sheet, which is thought to be well suited for various electronics applications as it naturally has a bandgap (among other properties). 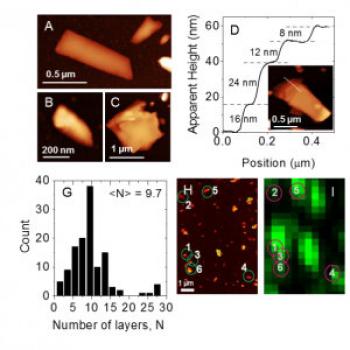 Black phosphorus, however, is known to be hard to manufacture in large amounts, a problem which the researchers claim to have solved. The TCD researchers placed a black phosphorus lump in a liquid solvent and then bombard it with sound waves. As a result, the mass separated into a large number of nanosheets that they using a centrifuge. That resulted in high-quality nanosheets consisting of only a few layers.

A potential problem remains - black phosphorus nanosheets degrade rapidly when in contact with water or oxygen. The team speculates that certain solvents form a protective shell around the sheet preventing oxygen or other oxidative species from reaching the phosphorus. It is, than, just a question of finding the right solvent.

The team tested several applications of the material, and found that it added strength and tensile toughness to materials and had a saturable absorption (a property of materials in which the absorption of light decreases with increasing light intensity) that exceeds even that of graphene.