Researchers from Korea's University of Seoul, Russia's RUDN University and several India-based institutes have created a nano-filter for water purification from synthetic dyes. The graphene-based composite can reportedly remove up to 100% of harmful compounds from water, and it can be used up to seven times without losing efficiency. In addition, the synthesis of the nanofilter itself is economical and environmentally friendly. 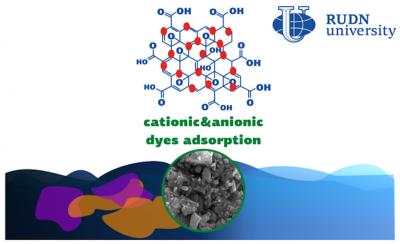 Synthetic dyes are used in industrial chemistry and pharmaceuticals. They reach the wastewater together with other industrial waste and pollute the environment. Existing methods of water purification are not quite practical, as the proposed adsorbents are usually disposable and work slowly. Therefore, scientists continue to look for effective and eco-friendly solutions to this problem. The team in this recent work has proposed a reusable graphene-based nanocomposite that can quickly absorb dyes from water.

Throughout the world, the discharging of excess organic dyes from different industries such as leather, cosmetics, textiles, paper etc. have the serious water polluted resources and caused a great damage to human health and aquatic system. These different organic dyes are non-degradable, and create carcinogenic, breathing, vomiting, eye burns, diarrhea and nausea in human beings. Graphene oxide have attracted great attention because of their broad spectrum of applications in the various fields including removal of different types of pollutants from water, said Vinod Kumar, RUDN University professor.

The team created an adsorbent made of graphene oxide (GO) and manganese oxide (MnO2). Nanocomposite synthesis takes one step, in an aqueous solution, at 120 ° C. The structure and chemical properties of the adsorbent were studied by scanning electron microscopy and spectroscopy. To test its effectiveness, scientists dissolved methyl orange and methylene blue in water. The first one is the cationic dye, the second one is anionic. 50 mg of adsorbent was placed in 50 ml of a solution with an initial contaminant concentration of 150 mg per liter. For five hours, the researchers measured the level of water contamination.

The adsorbent successfully removed 50.48% of methyl orange and 85.35% of methylene blue after just five minutes of action. After an hour, there were practically no pollutants left in the water â the complex absorbed 94-100% of the dyes. One gram of adsorbent was able to hold 149 mg of methyl orange and 178 mg of methylene blue. The complex also turned out to be reusable. The efficiency of removing pollutants did not fall below 90% even after 7 cycles of use.

From these results, it can be assumed that the synthesized adsorbent can be used to purify the water by filtration. By considering the low cost and higher adsorption potential, GO-MnO2 nanocomposite will be becoming a promising candidate for simultaneous removal of cationic and anionic dyes from polluted water for water purification., said Vinod Kumar, RUDN University professor.