Researchers at Purdue University have created a new type of graphene-enhanced non-liquid lubricant which reduces friction and wear. The suggested applications include air compressors for missile systems and more. The new liquid-free composite is made from a slurry of graphene, zinc oxide, and the polymer polyvinylidene difluoride. 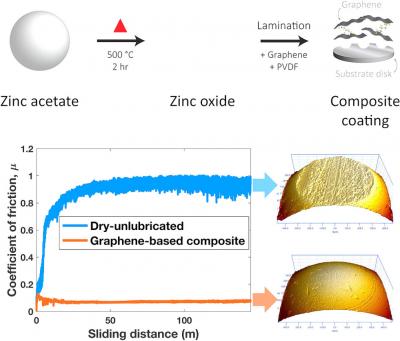 The nanosize zinc-oxide particles allow the lubricant to stick to the metal surface, and the polymer binds the whole mixture together, said the team, which also explained that solid lubricants are needed for numerous applications such as air compressors, equipment used in the food industry, space vehicles, gear-and-chain mechanisms, fasteners found in high-temperature environments, and missile systems.

According to the researches, liquid lubricants cannot be used in situations of high temperature or low pressure such as a vacuum environment, so dry solid-state lubricants are a viable alternative to their liquid counterparts in extreme operating environments.

The researchers tested stainless-steel surfaces coated with the new lubricant. “The durability and resilience of this adhesive coating suggest exceptional potential as a dry lubricant for high load-bearing applications,” the team said.

The researchers found that the composite lubricant sets up a film that significantly improves friction and wear reduction. Raman spectroscopic analysis of wear scars revealed this persistent protective film on contact surfaces.

The research is ongoing, and future work is planned with industrial partners. The researchers applied for a patent through the Purdue Research Foundation’s Office of Technology Commercialization.