Scientists at Rice University, the University of Tennessee, Knoxville (UT Knoxville) and Oak Ridge National Laboratory (ORNL) have demonstrated the use of a very small visible beam to burn graphene into microscopic patterns. 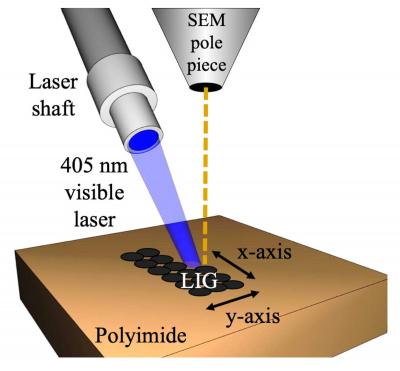 Scientists recorded the formation of laser-induced graphene made with a small laser mounted to a scanning electron microscope. Image credit: the Tour Group

The labs of Rice chemist James Tour, which discovered the original method to turn a common polymer into graphene in 2014, and Tennessee/ORNL materials scientist Philip Rack revealed they can now watch the conductive material form as it makes small traces of LIG in a scanning electron microscope (SEM).

The altered process creates LIG with features more than 60% smaller than the macro version and almost 10 times smaller than typically achieved with the former infrared laser.

Lower-powered lasers also make the process less expensive, Tour said. That could lead to wider commercial production of flexible electronics and sensors. "A key for electronics applications is to make smaller structures so that one could have a higher density, or more devices per unit area," Tour said. "This method allows us to make structures that are 10 times denser than we formerly made."

To prove the concept, the lab made flexible humidity sensors that are invisible to the naked eye and directly fabricated on polyimide, a commercial polymer. The devices were able to sense human breath with a response time of 250 milliseconds.

"This is much faster than the sampling rate for most commercial humidity sensors and enables the monitoring of rapid local humidity changes that can be caused by breathing," said the paper's lead author, Rice postdoctoral researcher Michael Stanford.

The smaller lasers pump light at a wavelength of 405 nanometers, in the blue-violet part of the spectrum. These are less powerful than the industrial lasers the Tour Group and others around the world are using to burn graphene into plastic, paper, wood and even food.

The SEM-mounted laser burns only the top five microns of the polymer, writing graphene features as small as 12 microns. (A human hair, by comparison, is 30 to 100 microns wide.)

"I did a lot of my Ph.D. research at ORNL, so I was aware of the excellent facilities and scientists and how they could help us with our project," Stanford said. "The LIG features we were creating were so small that they would have been next to impossible to find if we were to lase the patterns and then search for them in the microscope later."

"While the flash process will produce tons of graphene, the LIG process will allow graphene to be directly synthesized for precise electronics applications on surfaces," Tour said.