A team of Penn State researchers has designed an acoustic equivalent of magic-angle bilayer graphene. Two graphene sheets stacked on top of each other, called bilayer graphene, exhibit unique properties when one of the layers is twisted at a certain angle â a magic angle. The study of magic and other angle misalignments between two layers of material and their effects on material properties has been dubbed twistronics, a rapidly expanding field of condensed matter physics. 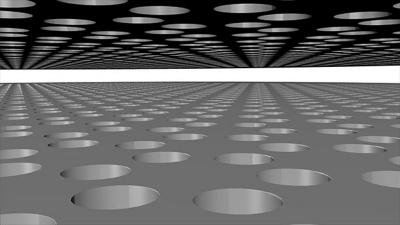 A visualization of the acoustic graphene array. Image by PSU

Examining analogues of condensed matter physics concepts can give us new ideas and applications in acoustics, said Yun Jing, associate professor of acoustics and biomedical engineering.

In a simulation, the research team built the acoustic design from a flat plate containing a hexagonal pattern of holes analogous to the arrangement of atoms in graphene at the nanoscale. They added another graphene-like plate layer, aligning the plates but leaving a vertical air gap between the two, and twisted the top plate. This twist created a characteristic Moiré pattern â also seen in typical magic-angle graphene â resulting from two overlaid similar patterns where one is slightly rotated or offset.

Researchers then simulated the movement of sound waves within the array. They found that as waves propagated between the plates at certain twist angles, acoustic energy concentrated around specific areas of the Moiré pattern where holes on the top and bottom layers aligned. This behavior, the researchers said, mirrored the behavior of electrons in magic-angle graphene at the atomic scale.

Electrons moving through materials like graphene are similar mathematically to acoustic waves moving through the air between repetitive structures, said Yuanchen Deng, doctoral student in acoustics.

These similarities can help researchers theoretically explore further applications of conventional magic-angle graphene without the restrictions that come with experimenting on it, the team said. Their acoustic system would be easier to fabricate in a laboratory because it’s not designed at the nanoscale, Jing said, and the twist would be easier to control given the sample’s larger size.

With a larger twist angle, we can reduce the size of the structure, Jing said. Samples will be easier to simulate and eventually fabricate.

The concentration of wave energy in certain locations of the acoustic graphene array could have applications for energy harvesting. If the graphene plates are engineered to be piezoelectric at the regions where the acoustic energy is confined, they could convert mechanical energy from acoustic wave vibrations into electrical energy. With further research, acoustic magic-angle graphene could become suitable for collecting energy in a variety of scenarios.

The researchers plan to examine further possibilities for the acoustic magic-angle graphene as well as expand their research into areas concerning different types of waves.

Bringing this bilayer setup into the macroscopic scale, you can experiment with different structures and waves, Deng said. Our system is acoustic but can provide feedback for any systems using mathematical functions similar to wave equations.