Researchers from Utrecht University, TU Delft and the Aalto University in Finland have shown that electronic components can be incorporated in single graphene wires (nanoribbons) with atomic precision. The result is a working electronic device that could be used in graphene-based electronic switches with extremely fast operational speeds. 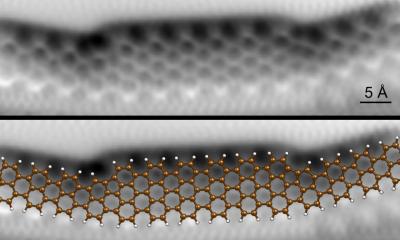 The researchers state that their solution to using graphene in electronics is atomically precise; By selecting certain precursor substances (molecules), the team can code the structure of the electrical circuit with extreme accuracy. The switch is based on the principle of graphene nanoribbons. Previous research has shown that the ribbon’s electronic characteristics are dependent on its atomic width. A ribbon that is five atoms wide is an ordinary electric wire with extremely good conduction characteristics, but adding two atoms makes the ribbon a semiconductor. “We are now able to seamlessly integrate a five-atom wide ribbon together with one that is seven atoms wide. That gives you a metal-semiconductor junction, which works as a diode”, according to the team.

In their study, the researchers evaporated the precursor molecules onto a gold crystal, which created new chemical compounds. “This is a different method from that currently used to produce electrical nanostructures, such as those on computer chips. For graphene, it is so important that the structure is precise at the atomic level, and it is likely that the chemical route is the only effective method”, the researchers explain.