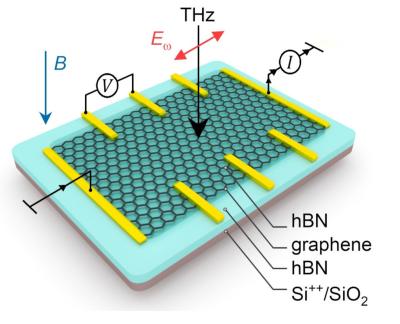 For example, a hydrogen atom has an area on the order of an angstrom squared. But if it is illuminated by radiation that is synchronous in frequency with the transition between electron orbits, the absorption area can increase by a factor of about two hundred thousand.

Resonant light absorption phenomena are actively 'tamed' to receive electromagnetic waves - from radio frequency to the ultraviolet range. The most practical resonant receiver is an antenna, a metal rod is the simplest example. Resonance conditions require a certain antenna size. A sensitive metal antenna must be comparable in size to the wavelength, and if it is smaller, it loses a lot of sensitivity.

For example, the frequency of 0.1 terahertz is proposed for 6G mobile data transmission. This would require antennas around 3 mm in size, taking a large and expensive area on the smartphone chip. Researchers are therefore looking to create ultra-compact and resonant radiation absorbers.

Two classes of resonances are interesting in this respect, both are observed in semiconductors. The first one is called plasmon resonance, and is associated with the synchronous movement of electrons and electromagnetic field from one sample boundary to the other. The second is called cyclotron resonance. It occurs when the frequency of the electromagnetic wave coincides with the frequency of electron rotation at the circular orbit in the magnetic field.

Both resonances have been successfully investigated experimentally. However, the absorption enhancement effect in most of the semiconductors studied so far has been small for practical applications.

The terahertz experiments were carried out at the University of Regensburg. The material of choice was graphene. High electronic quality of graphene enables long-lived plasma oscillations in it. The point is that oscillating electrons can pass from one sample boundary to the other without ever encountering impurities.

Magnetization of graphene "spins" electrons into orbits, thereby creating the conditions for cyclotron resonance. Already at small field values - about one Tesla - the frequency of the cyclotron resonance falls into the desired terahertz range. In the experiment, graphene was illuminated by radiation from a terahertz laser. The more light is absorbed, the more graphene heats up, and the more its resistance changes. Thus, the change in resistance of graphene under the influence of light is a measure of its absorption capacity.

The surprising result of the experiment was the super-strong absorption of radiation by graphene at twice the frequency of the cyclotron resonance. The signal at the conventional cyclotron frequency was relatively small. A detailed comparison of the experiment with the theory showed that the strong absorption is due to the interaction ("hybridization") of the double cyclotron and plasmon resonances. Near the frequency of the double cyclotron resonance, plasma waves are drastically slowed down - their speed drops to almost zero. Light incident on graphene is captured and transformed into an ultra-slow surface wave; such waves are 'trapped' in graphene and stay there until they are absorbed.

"The fact that absorption is enhanced when slow surface waves are excited has been known for quite some time," says Denis Bandurin a principal author of the paper, "However, it was previously thought that surface waves in semiconductors could not be slower than the electrons that move in the wave. For graphene, the speed of electrons is somewhere around 300 times slower than the speed of light. Our research shows that there is in fact no limit to the light freezing, and it can be slowed down to a complete stop when a small magnetic field is switched on.

An unusual property of graphene here is that it combines three roles - antenna, absorber, and photocurrent generator. Usually, in semiconductor engineering, these roles are assigned to different materials and different devices. At the same time, strong absorption in graphene can be achieved at extremely small (sub-wavelength) device size.

"We expect that graphene in a magnetic field could prove to be a super-absorber," comments a corresponding author of the paper Dmitry Svintsov, head of the Laboratory of 2d Materials for Optoelectronics at the MIPT Center for Photonics and 2D Materials, "That is, it will not only capture light from an area larger than its geometric size. It will be able to capture light from an area larger than the square of the wavelength. The anomalously low speed of plasmons in magnetized graphene creates all the prerequisites for this.

In this study, graphene proved to be a very convenient platform to observe anomalously strong terahertz absorption, comments the lead author of the paper Prof. Sergey Ganichev (University of Regensburg), however, the observability of the phenomenon is not limited to graphene alone - many natural materials and nanostructures based on them support ultra-slow surface waves.

One of the research team's immediate goals is to create compact super-absorbers that do not require low temperatures and strong magnetic fields.