Researchers at Rice University have demonstrated the mechano-chemical assembly of functionalized graphene layers into 3D graphitic solids (“graphite pellets”) via room temperature and low energy consuming processing. The pellet material is reportedly stronger and lighter than commercial graphite electrodes and could be promising for electrical storage applications with high energy and power densities. 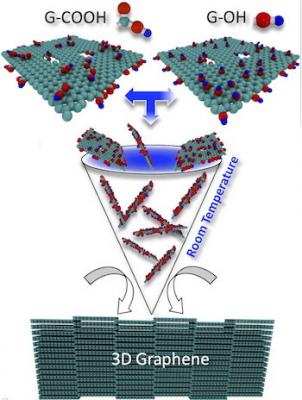 The environmentally friendly, scalable process can be done in minutes by hand by grinding chemically modified graphene into a powder and using a hand-powered press to squeeze the powder into a solid pellet. The team demonstrated how to make a battery-sized pellet, but the graphene powders with chemical functionalities attached to it can be pressed into any form. They said the material could be suitable for structural, catalytic, electrochemical and electronic applications.

The process began with two sets of functionalized nanotubes, one with carboxylic acid and the other with hydroxyl molecules. Once crushed to combine them either by hand or machine, they are placed in a lab-scale hydraulic press and subjected to 5 tons of pressure. The functional groups cross-linked the graphene sheets to each other, and even though no liquids were involved, they produced a tiny amount of water as a byproduct of the reaction, Kabbani said.

The pellets remained stable when placed in hot water for five hours, even when stirred; this confirmed the interlocking of the graphene sheets within, the researchers reported.

The Department of Defense, the Air Force Office of Scientific Research, the Government of India Nano Mission and the state of Nuevo Leon, Mexico, supported the research. Supercomputing resources were provided by Rice’s National Science Foundation-supported DAVinCI supercomputer administered by the Center for Research Computing and procured in partnership with Rice’s Ken Kennedy Institute for Information Technology.