Recently, several reports have popped up regarding an unknown number of China’s Z-10 air-to-ground attack helicopters that have been upgraded with graphene to serve as an extra layer of protection. For example, Asia Times reported that "the People’s Liberation Army’s Z-10 attack helicopter is now equipped with extra armor made with the lightweight, structurally rigid graphene semimetal, the latest addition to protect the chopper’s airframe without eating into its effective payload". 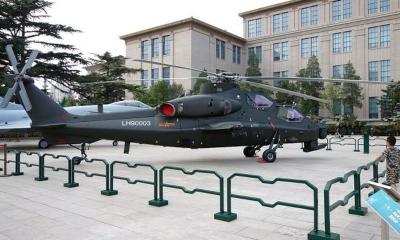 Several websites mentioned a video that appeared on China Central Television showing one of the helicopters with "an extra armor module near its tandem cockpit" touch down after a flight. The video has not been independently verified for authenticity, and Beijing is known to keep its military secrets well under wraps.

Previous models of the Z-10 series did not have extra armor due to engine constraints and designers with the state-owned Aviation Industry Corp. of China had to come up with other types of additional protective gear so the helicopter could carry a sufficient payload.

The Z-10 is primarily designed for anti-tank warfare but has secondary air-to-air capability as well. In aerial warfare Z-10s often need to fly low to attack ground targets, making them vulnerable to anti-aircraft fire.

According to various reports, the bottom and sides of the Z-10 cockpit are protected by a composite graphene armor, and so are the engines and the fuel tank in the middle of the fuselage.