» Scientists use nanoporous graphene membrane for...

A team of scientists led by the Department of Energy's Oak Ridge National Laboratory (ORNL) demonstrated an energy-efficient desalination technology that makes use of a porous membrane made of free-standing, porous graphene. 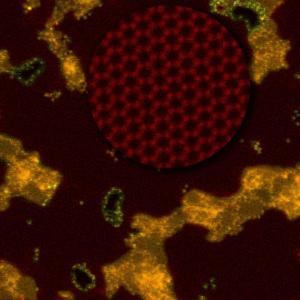 The scientists report that the flux through these graphene membranes was at least an order of magnitude higher than the water that pass through state-of-the-art reverse osmosis polymeric membranes. Many of the current methods for purifying water require a significant amount of energy. Making the membrane more porous and thinner (properteis graphene is well suited to supply), helps increase the flux through the membrane and reduce the pressure requirements to reduce the amount of energy that the process requires.

To make graphene for the membrane, the researchers flowed methane through a tube furnace at 1,000 degrees over a copper foil that catalyzed its decomposition into carbon and hydrogen. They transferred the graphene membrane to a silicon nitride support with a micrometer-sized hole. Then the team exposed the graphene to an oxygen plasma that knocked carbon atoms out of the graphene's nanoscale lattice to create pores. The longer the graphene membrane was exposed to the plasma, the bigger the pores that formed, and the more made.

The prepared membrane was placed between two liquids: salty water on one side, fresh on the other. The silicon nitride chip held the graphene membrane in place while water flowed through it from one chamber to the other. The membrane allowed rapid transport of water through the membrane and rejected nearly 100 percent of the salt ions (positively charged sodium atoms and negatively charged chloride atoms).

The scientists said making the porous graphene membranes used in the experiment is viable on an industrial scale. A realistic concern, though, is growths on membrane surfaces that clog them (called "biofouling") that plague today's reverse osmosis membranes.