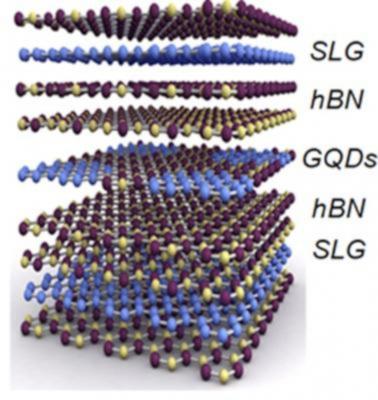 The schematic structure of the devices

In the study, it was demonstrated that high-quality graphene quantum dots (GQDs), regardless of whether they were ordered or randomly distributed, could be successfully synthesized in a matrix of monolayer hexagonal boron nitride (hBN). Here, the growth of GQDs within the layer of hBN was shown to be catalytically supported by the platinum (Pt) nanoparticles distributed in-between the hBN and supporting oxidised silicon (SiO2) wafer, when the whole structure was treated by the heat in the methane gas (CH4). It was also shown, that due to the same lattice structure (hexagonal) and small lattice mismatch (~1.5%) of graphene and hBN, graphene islands grow in the hBN with passivated edge states, thereby giving rise to the formation of defect-less quantum dots embedded in the hBN monolayer.

A new study led by the Ulsan National Institute of Science and Technology in South Korea reveals a technology capable of fabricating highly ordered arrays of graphene quantum dots.

Researchers affiliated with UNIST (Ulsan National Institute of Science and Technology) in Korea have engineered a new type of carbon nanomaterials, reportedly capable of changing shapes and colors depending on the type of solvents used. Such materials have attracted much attention thanks to their unique optical properties and structures.

The research team has presented a unique design and synthesis of hybrid carbon nanosheets (CNSs), which show a strong solvatochromic behavior (the ability of a chemical to change color due to a change in solvent polarity) with wide color tunability ranging from blue to orange and even to white in various solvents. This unique hybrid CNS features clusters of carbon nanorings on the surface of graphene-oxide (GO) nanosheets as the product of the hydrothermal reaction of small molecular precursors in the presence of GO nanosheets. Moreover, under UV and visible-light excitation, the hybrid CNS exhibits tunable emission spanning the wide range of colors in a series of solvents with different polarities.

Researchers at the University of Texas at Austin, Columbia University, and the IBS Center for Multdimensional Carbon Materials at Ulsan have developed a new way to make high-quality Bernal-stacked bilayer graphene an important material for electronics and photonics.

The researchers have studied a way to make bilayer graphene that yields a high percentage of AB stacked material, and were able to produce sub-millimetre single-crystal AB-stacked bilayer graphene domains. In the CVD chamber used to grow their graphene, the researchers intentionally introduced a small amount of oxygen (parts per million concentrations). This oxygen, when combined with the copper foil substrate on which the graphene was grown, dissociates methane molecule precursors into carbon atoms. These atoms then diffuse through the copper foil and help form a second layer of graphene.

Researchers at the Ulsan National Institute of Science and Technology (UNIST) announced the development of an iron-carbon composite catalyst that can contribute to a reduction in the costs of fuel cells and Li-air batteries.

The carbon composite catalyst contains iron and nitrogen and uses a graphene nanoplate. It is reportedly better than existing carbon catalysts in terms of durability and performance, and allows mass production at a low cost. The researchers hope that it will be able to contribute to the commercialization of metal-air batteries.

Researchers at the University of Stanford in the US, the Ulsan National Institute of Science and Technology (UNIST) in South Korea and Queen’s University in the UK showed that graphene is an excellent substrate for assembling small organic molecules and that such heterostructures might be used in applications like high-performance detectors, solar cells and flexible transistors.

The Ulsan National Institute of Science and Technology has developed a transparent hybrid electronic device production technique for the manufacturing of wireless smart sensors. The is based on a combination of graphene and metal nanowires and the team says it maintains its electrical characteristics even when folded or pulled.

The smart sensor that is based on the device can be attached to various surfaces, even the human skin, for real-time monitoring of changes in biomaterials (like various proteins). The sensor wirelessly transmits the changes in biomaterials using its built-in antenna and maintains excellent flexibility even after long exposure to air and heat. The power required for the transmission and reception is supplied by its transmission antenna, and thus no battery is required.

Introducing foreign elements (there are not carbon) into graphene's carbon lattice structure is a known way of developing other 2D crystals. Nitrogen has a suitable atomic size and structure to fit into a strong network of carbon atoms, by creating bonds in which electrons are shared by the whole network.

Researchers at the Ulsan National Institute of Science and Technology (UNIST) in Korea managed to synthesize a new multifunctional 2D ordered crystal structure, designated as C2N-h2D crystal, that they claim exhibits more enhanced electrical features than those of graphene.

The thin-layered micrometre-sized 2D crystal was the result of a reaction between âhexaaminobenzene trihydrochloride and âhexaketocyclohexane octahydrate and it exhibits a strong semiconducting nature, as it has a large Ion/Ioff ratio that equals a fast switching speed for semiconducting devices. The Ion/Ioff ratio of the C2N-h2D crystal was confirmed to be 100 times more efficient than current silicone semiconductors in production.

A strategic cooperation agreement of a mass production of graphene technology transfer has recently been signed between the Korean UNIST (Ulsan National Institute of Technology) and Deokyang Energen Corp. (one of Korea's prominent industrial gas producers).

Under this agreement, the technology for mass production of graphene will be moved to Deokyang Energen Corp. and will be widely used for commercial applications. Ulsan says that the value of this technique is about $1 billion USD and 1.5% of total gross, created from this technique will be also added to this value as a license issue fee.