AIXTRON recently showcased two of its systems, which enable cost effective graphene production for a myriad of applications such as consumer electronics, sensors and photonic applications. 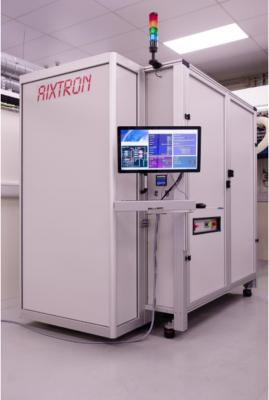 Graphene Flagship partner AIXTRON introduced results from two of its systems that enable the large-scale production of graphene through chemical vapor deposition (CVD). The Neutron is a roll-to-roll system capable of depositing large areas of graphene on metal foils under ambient conditions; and the CCS 2D system enables wafer-scale production of graphene on insulating wafers, a breakthrough that could speed up the development of new graphene electronics.

The innovative Neutron system has a capacity of up to 20,000 square meters of graphene per year; this is around 200 times the production capacity of typical reactors in use today. Alex Jouvray, Programme Manager at AIXTRON and Graphene Flagship Work Package Leader for Production, explains that "Neutron is the product that resulted from of over three years of R&D, which included the demonstration of roll-to-roll graphene growth during the first stages of the Graphene Flagship project." Neutron brings the production of large areas of graphene beyond academic circles and to the factory floor. "The foil that is coated with graphene enters and exits the Neutron system under ambient conditions," explains Jouvray. "Since it doesn't need a vacuum, the Neutron can be easily placed inline at graphene manufacturing plants," he adds. Large-area monolayer graphene produced using this novel technique could lead to applications in transparent conductors, wearable devices, and coatings. "Moreover, it's economical," adds Jouvray. "With Neutron, we are able to bring the cost of a square meter of graphene CVD films down by two orders of magnitude," he explains. "It's a game-changer."

The versatile CCS system targets semiconductor applications. Here, there are major contamination requirements; usually, graphene needs to be grown on metallic surfaces and foils, which, being non-flat, are challenging to handle in the semiconductor industry and contain metal contamination that require further cleaning steps before the material can enter a fab. During the first years of the Graphene Flagship project, together with the group of Camilla Coletti at Graphene Flagship partner Istituto Italiano di Tecnologia (IIT), AIXTRON scaled the growth of graphene on insulators to full wafer-scale on its CCS 2D reactor, which can accommodate 2-inch up to 8-inch wafers. The wafers exhibit low contamination levels that meet the requirements of semiconductor fabs directly after growth. Camilla Coletti comments that "such tremendous progress is only possible thanks to the Graphene Flagship project which brings together top scientists from academia and engineers from a world-leading equipment company." The system is also capable of large-scale production of other layered materials, such as boron nitride or transition metal dichalcogenides.