Researchers from Southeast University and Suzhou University of Science and Technology in China have combined the properties of graphene and paraffin to create a novel material that exhibits controllable, reversible transition between a slippery and a rough surface. They fabricated a graphene-based film with a porous surface filled with paraffin that allows droplets of water and other fluids to stick or slide on demand, while following complicated pathways. 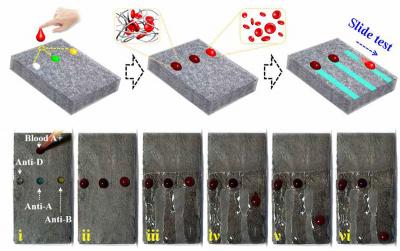 The research team used near-infrared (NIR) laser irradiation to control the surface behavior of the film and form patterned flow pathways on it. Their work can simplify the manipulation of liquids inside microplates that are extensively used for bioassays in biomedical and clinical laboratories; it may also prove to be a valuable tool for blood grouping diagnosis.

Graphene synthesis can be manipulated to yield porous, sponge-like structures capable of absorbing NIR light and converting it to thermal energy. The researchers took advantage of this photothermal property by infusing porous films of reduced graphene oxide in paraffin and using NIR irradiation to control the properties of the surface of the newly developed material. When the NIR light was on, the paraffin was heated until it melted, and droplets of liquid (water with dyes) were observed to slide down along the graphene film. When the light was turned off, the paraffin returned to its solid state and the droplets were pinned on the film surface. The researchers also used masks of NIR light, which act like stencil, permitting light to go through cutouts on an opaque plate or film, to treat and warm the surface of the graphene underneath, along pre-designed pathways. This way, they were able to test and evaluate the motion of the droplets along these pathways.

The researchers first synthesized the porous graphene sponge film, which they then turned into 300-μm-thick paraffin-infused porous graphene film (PIPGF). They did so by immersing the graphene sponge in pure melted paraffin and then leaving the sample in a vacuum oven at 80°C for 2 hours. As a result, the pores in the film were saturated with the paraffin.

The experiments required NIR masks with a large irradiation area (3 cm × 3 cm) and uniform power intensity to make sure the irradiated paraffin melted at a similar speed as the corresponding patterns. “The set-up of the irradiation light optic system [was] a challenge for us to construct,” says Jie Wang, first author of the article.

The team initially aimed at liquid handling in microplate technology, such as, for example, for accurately pipetting sample liquids onto microplates. “As we were thinking of more applications, we came up with the idea of microreactors for grouping blood. We are really surprised to find the results are really good in this case as well,” Wang says.

Traditionally, the methods that determine the blood group, such as A, B, AB, or O, require very good observation skills of phenomena that are not always easy to detect. “With our PIPGF microreactor, we can easily group blood by simply monitoring whether the composite blood droplets slide down or not,” Wang says.

“This study is very innovative and it creates a leap forward in advanced slippery liquid-infused porous surfaces (SLIPS) materials by enabling reversible and remote control over surface wettability and programmable design of fluid pathways,” says Luoran Shang, a researcher at the School of Engineering and Applied Sciences at Harvard University. “It is inspiring for various multidisciplinary research areas involving liquid manipulation, such as microfluidic reactors [and] lab-on-a-chip devices,” she says.