Scientists from the Shanghai Institute of Ceramics in China have developed a 'smart' wallpaper based on highly flexible fire-resistant inorganic paper embedded with ultralong hydroxyapatite nanowires that serve as the substrate and graphene oxide as the thermosensitive sensor. 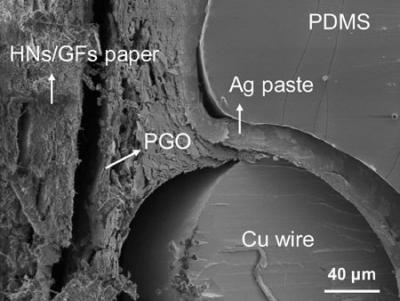 The authors explain: "After the paper-making process, hydroxyapatite nanowires and glass fibers are assembled into a well-defined multilayered structure spontaneously, which may be explained by the mechanical equilibrium between physical and chemical forces. The nacre-like multilayered structure is regarded as an effective strategy to balance the strength and toughness".

In addition, polydopamine is used as both a reductant and a capping agent to simultaneously improve the responsive sensitivity and flame retardancy of the graphene oxide thermosensitive sensor.

Other desirable features of this nanotechnology wallpaper reportedly include environmental friendliness, mechanical robustness, and high flexibility.

The smart fire alarm wallpaper reported by the Chinese team can be processed into various shapes, dyed with different colors, and printed with the commercial printer, thus it is promising for applications such as high-safety interior decoration of houses.