» Graphene-based stretchy supercapacitor is a step...

A team of researchers at Nanyang Technological University, Singapore, has produced a stretchy micro-supercapacitor using ribbons of graphene. The team produces stretchable electrodes and integrated them into a supercapacitor, in what can be seen as a promising step towards bendy power sources for flexible electronics. 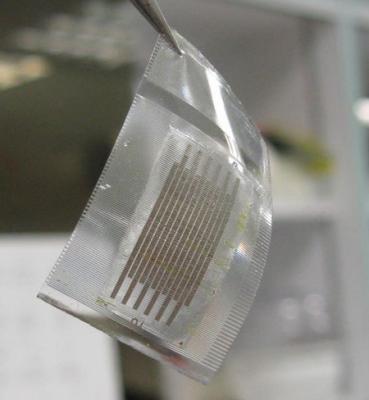 In this study, the team focused on the fact that graphene can be flexible and foldable, but it cannot usually be stretched; They attempted to fix that problem by looking at skin, which has a wave-like microstructure, and started to think of how to make graphene also more like a wave. They started by making graphene nano-ribbons, having more control over its structure and thickness that way (which can affect the conductivity of the electrodes and how much energy the supercapacitor overall can hold).Next they attempted to create the stretchable polymer chip with a series of pyramidal ridges. The researchers placed the graphene ribbons across the ridges, creating the wave-like structure. The design allowed the material to stretch without the graphene electrodes of the superconductor detaching, cracking or deforming. In addition, the team developed kirigami structures, which are variations of origami folds, to make the supercapacitors 500 percent more flexible without decaying their electrochemical performance.

As a final test, the team powered an LCD from a calculator with the stretchy graphene-based micro-supercapacitor. Similarly, such stretchy supercapacitors can be used in pressure or chemical sensors.

In future experiments, the researchers hope to increase the electrode's surface area so it can hold even more energy. The current version only stores enough energy to power LCD devices for a minute, according to the researchers.

In June 2015, a team at the University of Michigan utilized Japanese paper cutting techniques, called kirigami, to create a new type of flexible conductor. The team believes that this technique may open up big possibilities for implantable medical devices, which have to flex and bend within the human body to work. Another option is gadgets that won't break when bending or flexing.