A research team at the University of Michigan utilized Japanese paper cutting techniques, called kirigami, to create a new type of flexible conductor. The team believes that this technique may open up big possibilities for implantable medical devices, which have to flex and bend within the human body to work. Another option is gadgets that won't break when bending or flexing. 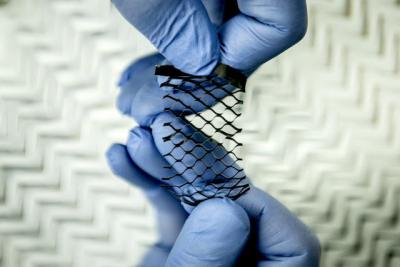 The first prototype of the kirigami stretchable conductor consisted of tracing paper covered in carbon nanotubes. The layout was quite simple, with cuts like rows of dashes. Later concepts were more intricate. for example, conductor sheets made out of graphene oxide, with etching cuts into the surface just a tenth of a millimeter long using laser beams and a plasma of oxygen ions and electrons.

The scientists say that the reason no one has pre-cut these conductive sheets before has to do with material science. It is possible, in principle, to do this with sheets of metal, but the homogeneity of the material is a factor. There are impurities, especially in composites, which can make the microscopic cuts go off course. Graphene, however, made an optimal medium for the electro-kirigami technique.