As part of a collaboration between the Graphene Flagship and the European Space Agency, experiments testing graphene for two different space-related applications have been performed. These have been reported to show very promising results, based on which the Flagship is to continue the development of graphene devices for use in space. 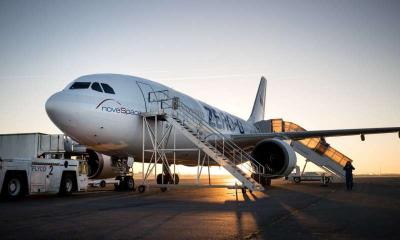 Graphene's excellent thermal properties are promising for improving the performance of loop heat pipes, thermal management systems used in aerospace and satellite applications. Graphene could also have a use in space propulsion, due to its lightness and strong interaction with light. The Graphene Flagship tested both these applications in recent experiments in November and December 2017.

The main element of the loop heat pipe is the metallic wick, where heat is transferred from a hot object into a fluid, which cools the system. Two different types of graphene were tested in a collaboration between the Microgravity Research Centre, Université libre de Bruxelles, Belgium; the Cambridge Graphene Centre, University of Cambridge, UK; the Institute for Organic Synthesis and Photoreactivity and the Institute for Microelectronics and Microsystems, both at the National Research Council of Italy (CNR), Italy; and industry partner Leonardo Spa, Italy, a global leader in aerospace, operating in space systems and high-tech instrument manufacturing and in the management of launch and in-orbit services and satellite services.

"We are aiming at an increased lifetime and an improved autonomy of the satellites and space probes. By adding graphene, we will have a more reliable loop heat pipe, capable to operate autonomously in space," said Dr Marco Molina, Chief Technical Officer of Leonardo's space line of business.

After excellent results in laboratory tests, the wicks for the loop heat pipes were tested in two ESA parabolic flight campaigns in November and December. "We have good tests done on earth in the lab, and now of course because the applications will be in satellites, we needed to see how the wicks perform in low gravity conditions and also in hypergravity conditions, to simulate a satellite launch," said Prof Ferrari.

"It was amazing, the feeling is incredible and its extremely interesting to do experiments in these kinds of conditions but also to enjoy the free-floating zone. The whole experience was really great," said Vanja Miskovic, a student at Université libre de Bruxelles who performed the experiment in microgravity during a parabolic flight operated by Novespace.

Testing graphene space-propulsion potential, a team of PhD students from Delft Technical University (TU Delft), Netherlands participated in ESA's Drop Your Thesis! campaign. To create extreme microgravity conditions, a capsule containing the experiment is catapulted up and down the 146 meter tower, leading to 9.3 seconds of weightlessness. The team - named GrapheneX - designed and built an experiment to test graphene for use in solar sails, using free-floating graphene membranes provided by Flagship partner Graphenea. The idea was to test how the graphene membranes would behave under radiation pressure from lasers. In total, the experiment ran five times over 13-17 November 2017.

Though the GrapheneX experiment is now finished, the team is considering further tests as part of a new and ambitious research project, to continue exploring the influence of radiation pressure on graphene light sails.

The results of the two projects demonstrate graphene's versatility and are the first step towards expanding the frontiers of graphene research.