Researchers at the Autonomous University of Madrid, in collaboration with CIC nanoGUNE and the Institut Néel of Grenoble, have demonstrated that the simple absorption of a hydrogen atom on a layer of graphene magnetizes a large region of it. As a result, by selectively manipulating these hydrogen atoms, it is possible to produce magnetic graphene with atomic precision. 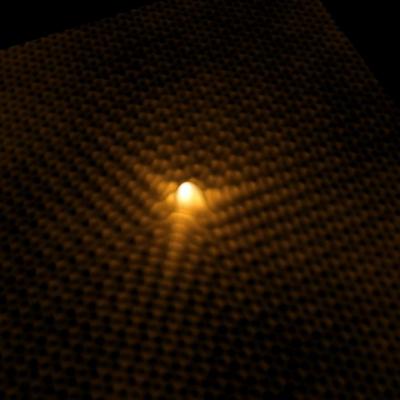 The experiments were carried out with the help of a tunnel-effect microscope. This microscope allows matter to be imaged and manipulated on an atomic scale. Likewise, the results show that these induced magnetic moments interact strongly with each other at great distances (compared with the atomic scale) while also abiding by a particular rule: the magnetic moments are added or neutralized depending critically on the relative position between the absorbed hydrogen atoms. What is more, and of equal importance, is that the team has managed to manipulate the individual hydrogen atoms in a controlled way, and this has enabled the researchers to freely establish the magnetic properties of selected regions of graphene.

Laboratories across the world have been trying to add magnetism to the long list of properties of this graphene for many years. This interest arises for various reasons, the most significant of which being that graphene could be an ideal material for use in spintronic technology. This promising technology is aiming to replace traditional electronics by transmitting both magnetic and electronic information at the same time, which could give rise to a new generation of more powerful computers. In that aspect, the results obtained in this work, which indicate the possibility of freely generating magnetic moments in the graphene and showing how these moments can communicate with each other over great distances, might be paving the way for a promising future for this material in the emerging field of spintronics.