Lux Research recently came out with a rather menacing prediction that graphene is destined to become the "next carbon nanotube". This statement refers to the massive hype that surrounded carbon nanotubes in the past, which failed to be followed by actual commercial success. Lux Research believes that graphene, despite its impressive properties and seemingly endless possibilities, will not follow in silicon's footsteps and find ubiquitous applications, but rather become closer to carbon nanotubes and find limited uses in somewhat niche markets. 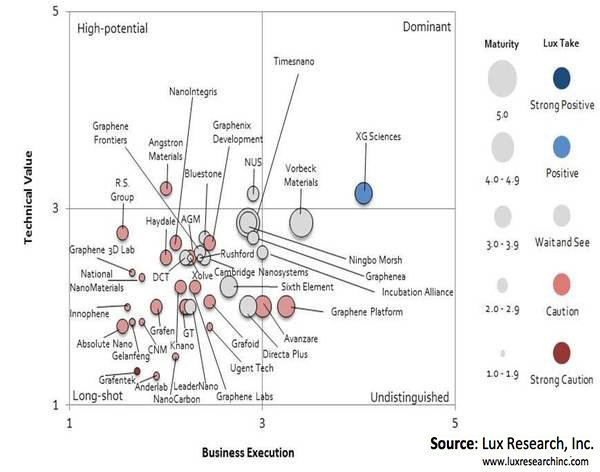 Lux names three major reasons for their prediction. The first is over-aggressive capacity expansions coupled with limited commercial demand. Lux states that total global graphene nanoplatelet (GNP) production capacity has increased from around 120 tons per year in 2012 to 910 tons per year today, driven largely by aggressive Chinese capacity expansions such as by Ningbo Morsh and Xiamen Knano. On the contrary, demand growth has been significantly more sluggish, which creates a market glut.

A second reason touches on the issue of undistinguished and unproven suppliers, which constitute much of the graphene market. Lux claims many companies are "start-ups with unproven technical value and business execution" which show an inability to provide cost and performance data, questionable value proposition, and other troubling issues.

The final reason given by Lux is the lack of concrete performance metrics demonstrating true value proposition in most segments. As the ability to maintain the performance of graphene when the material is dispersed in a matrix is a major challenge, plus agglomeration and viscosity issues limit the practical loading of graphene as a primary reinforcement or additive, evaluation of graphene’s true commercial value proposition are that of a final device or product (e.g. composite part, battery, supercapacitor, transparent conductive film) containing the material, and on this front graphene is said by Lux to be sorely lacking. Also, not only do graphene products have to prove themselves on performance, but they need be compelling enough to justify their higher upfront price tags. As one telling example, Lux’s Energy Storage team has found that despite the hype around graphene as a material to displace activated carbon in supercapacitors, graphene will lag behind other active materials and will struggle to beat incumbents.

It is, however, important to stress that this bleak outlook at graphene's future is one company's opinion. In 2014, Allied Market Research released a new graphene market report in which they analyze graphene opportunities and forecast the market from 2013 to 2020. According to Allied, the global graphene market will grow to $149.1 million by 2020 - a 44% yearly CAGR from 2014. In 2015, Future Markets released a new market report in which they estimate that the graphene market (mostly raw materials sales) was about $9-12 million in 2013 and $15-20 million in 2014. They estimate the market to grow to around $25-45 million in 2015.