A theoretical collaborative study by the University of Antwerp (Belgium), the University of Camerino (Italy) and the University of New South Wales (Australia) has explained previously mystifying experimental results obtained independently by two research groups in the USA, which showed coupled holes and electrons in dual-layer graphene structures sometimes moved in exactly the opposite direction to that predicted. 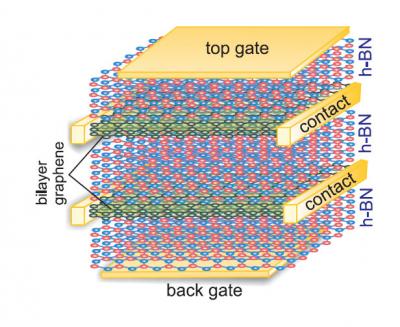 The new work showed that this apparently contradictory phenomenon is associated with the bandgap in dual-layer graphene structures, a bandgap which is very much smaller than in conventional semiconductors.

In the device studied, a sheet of hexagonal-boron-nitride (hBN) separates two sheets of atomically-thin (2D) bilayer graphene, with the insulating hBN preventing recombination of electrons and holes.

Passing a current through one sheet and measuring the drag signal in the other sheet allows experimenters to measure the interactions between electrons in one sheet and holes in the other, and to ultimately detect a clear signature of superfluid formation (a quantum state with zero viscosity).

Only recently, new 2D heterostructures with sufficiently thin insulating barriers have been developed that allow to observe features caused by strong electron-hole interactions.

Experiments published in 2016 showed puzzling results. Under certain experimental conditions, the Coulomb drag was found to be negative i.e. moving an electron in one direction caused the hole in the other sheet to move in the opposite direction. These results could not be explained by existing theories.

In this new study, these puzzling results are explained using crucial multi-band processes that had not previously been considered in theoretical models. Previous experimental studies of Coulomb drag had been performed in conventional semiconductor systems, which have much larger bandgaps. However, bilayer graphene has a very small bandgap, and it can be changed by the perpendicular electric fields from the metal gates positioned above and below the sample.

The calculation of transport in both conduction and valence bands in each of the graphene bilayers was the ‘missing link’ that marries theory to experimental results. The strange negative drag happens when the thermal energy approaches the bandgap energy.