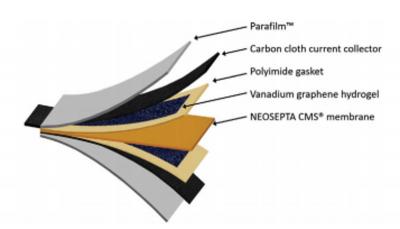 The device consists of high specific surface area electrodes paired with an electrolyte, which contains a redox species that can exist in more than two oxidation states. The two initially equal half-cells of the device consist of a reduced graphene oxide hydrogel which encapsulates vanadium ions, synthesized with a single-step method.

During charge, the oxidation state of the vanadium ions changes, resulting in two half-cells with different potentials which considerably increases the energy density. The achieved maximum capacity of more than 225 mAh g−1 is roughly eight times higher than that of comparable graphene hydrogel supercapacitors without vanadium content, but the potentiostatic charging time is only double.

The team mentioned that the vanadium ion addition also improves the self-discharge characteristics of the device. Moreover, the self-discharge does not permanently damage the hybrid device since both half-cells initially consist of the same vanadium graphene hydrogel and discharging resets it to initial conditions.

The researchers have designed a facile method to synthesize a hybrid vanadium-graphene hydrogel having the redox activity of the vanadium ions and the high-surface-area of the 3D graphene framework. This device can be operated as a battery, supercapacitor, or hybrid, depending on the operating current density. Its unique power-handling capabilities make it suitable for a wide range of applications.

In future work, the team plans to further increase the energy density of the device by optimization of the one-step synthesis of the vanadium graphene-hydrogel.