» Researchers use graphene to increase the sensitivity of...

Researchers at the University of Pennsylvania have used graphene to increase the sensitivity of diagnostic devices, in particular those used to monitor and treat HIV. The team combined a trick of DNA engineering which involves an engineered piece of DNA called a hairpin, with biosensors, increasing the sensitivity of the sensors by a factor of 50,000 in less than an hour. 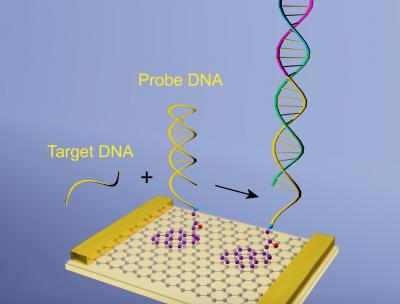 The biosensorsare made with graphene, and so can be used as an extremely sensitive way of detecting biological signals, measuring the current that flows through graphene surface in the presence of biomolecules. When DNA or RNA molecules bind to the graphene, it produces a big change in the conductivity of the atomically thin material, allowing the researchers to detect infections and to measure viral loads.

In the past, the researchers used one sequence of single-stranded DNA, which would then bind to the target DNA molecule and produce a change in current. However, this technique only allowed the target molecule to bind at one site. The DNA hairpin used in the new technique has a curled structure that unfurls when the target molecule binds to it.

When the hairpin opens, other “helper” DNA that has been added to the system binds with the open hairpin and pushes the target molecule out, allowing it to continuously to bind with many different sites on the sensor, bringing the sensitivity to a range that could prove useful in future diagnostics.

One possible application of this technique may be in portable and inexpensive diagnostic devices capable of detecting an infectious agent in people simply and conveniently and with enough sensitivity to catch it before the level of infection becomes very large.

“One example would be people with HIV who are being treated, either with current antiretroviral therapy, or with new approaches that are being developed” the team says. “If their treatment starts to fail and the level of virus starts to grow, it would be important to catch it quickly and when it's at a relatively low level. It might be possible to combine the sensor with some other sample handling methods so that people might be able to monitor their viral load themselves at home, as opposed to having to go to the doctor. It might even be possible to use it in low-resource settings, parts of the world that don’t have access to the technology needed for this kind of monitoring.”

The team is collaborating with other researchers, including David Issadore of the School of Engineering and Applied Science and Ronald Collman of the Perelman School of Medicine to move this technology in the direction of something useful for HIV and in other diagnostic tools.