Skeleton Technologiesâ SkelCap line of ultracapacitors are based on patented technologies of ultracapacitor design and advanced nanostructured carbon allowing for higher energy and power density than competitors. The company has devised a process that uses silicon carbide to make what they call "curved graphene".

Skeleton is reportedly working on increasing the manufacturing capacity for the GrossrÃ¶hrsdorf production facility from half a million to about 1,000,000 supercapacitors per year in 2020. In terms of footprint, the current 3,500 square meters will be double to about 7,000 square meters by 2020.

In 2020 Skeleton Technologies raised â¬41.3 million ($48.5 million) in Series D financing round, bringing its total capital raised to over $109 million.

In September 2020 it was reported that Skeleton Technologies is developing a graphene-enhanced âSuperBatteryâ, and that company signed a â¬1 billion letter of intent with a leading automotive manufacturer to bring the technology to market, most likely in 2023.

In August 2015, Skeleton entered the commercial truck fleet market when it launched a graphene-based device that helps truck drivers start their engines after long periods of inactivity or in cold weather. In July 2016, Skeleton Technologies announced that it will join French firm Flying Whalesâ programme to build a 60-ton Large Capacity Airship, or LCA60T, for the global transport market. In 2020 Skeleton signed a large-scale contract with Medcom to deploy its supercapacitors for Warsaw's Tram network.

In 2019 Skeleton Technologies stated its plan to invest â¬25 million in its plant located in the German state of Saxony. With this investment, Skeleton aims to expand its research and development as well as scale its production.

Skeleton Technologies has officially launched its SuperBattery, and unveiled Shell as its partner. Skeleton is joining a Shell-led consortium to offer electrification solutions for mining sites.

SuperBattery is an innovative technology combining the characteristics of supercapacitors and batteries. SuperBattery has been developed to serve the needs of several sectors and is currently being used and/or tested in hybrid and fuel cell EVs, buses, trucks, and charging infrastructure.

Skeleton Technologies has announced that it will supply its 'curved graphene'-enhanced supercapacitors to the metro units that Spanish manufacturer CAF will provide to the city of Granada, Spain.

Headquartered in Donostia - San Sebastian (Spain), the CAF Power & Automation has been working with Skeleton Technologies since last year. Following a successful tender, the Spanish manufacturer has been selected by the Metro de Granada to supply 8 new units for the city's network, which will be added to the 15 previously-delivered units which are
currently in service.

According to the company, 100 million euros will be invested in production and 120 million euros in development and research as well as in a future ramp-up of production. In the future, 12 million supercapacitors are to be manufactured annually in MarkranstÃ¤dt. The start of production is planned for 2024.

Skeleton Technologies and ZPUE, the largest manufacturer of electrical devices for electrical power distribution utilities in Poland, have entered into a commercial agreement to provide energy storage solutions to the Polish market.

The two companies signed a Letter of Intent under which Skeleton should supply supercapacitors for rail wayside storage at 200 MW per year from 2023 to 2025.

Skeleton Technologies has announced its Round D3 with 37.6 million euros of equity investments. The Round was led by Taavet Hinrikus, from Taavet+Sten with Nidoco AB, EIT Innoenergy, Bengt Wahlqvist, co-founder of battery charging specialist CTEK, a group of founding team members of Adyen and others joining.

The investments will be aimed at further scale-up of supercapacitor production in Saxony, Germany, to meet customer demand and continuing the development of supercapacitor and curved graphene technology in new battery products.

Germany-based Skeleton Technologies has been on the forefront of graphene-based supercapacitors development for many years, and the company recently made some major announcements, including a large (>â¬70 million) financing round, the super-battery project and several strategic customers and projects - including ones with Medcom, Skoda, CAF, Wrightbus and Marubeni. 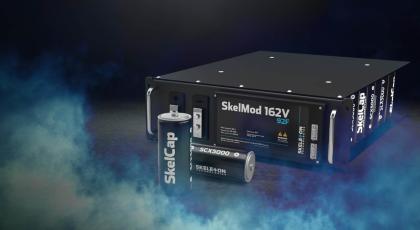 We recently talked with Skeleton's VP of automotive products, Sebastian Pohlmann, who updated us on the company's business and technology.

Skeleton Technologies has signed a contract with CAF Power & Automation, a global manufacturer of electric power solutions for the rail industry, to supply supercapacitors in trams powered by CAF P&’s OESS-s (On Board Energy Storage Systems). 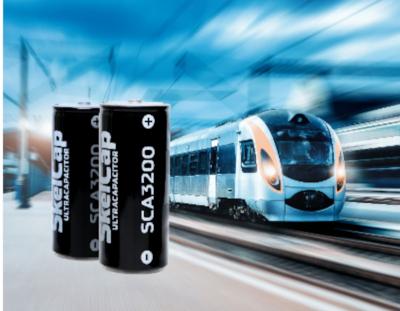 Skeleton’s cells will reportedly be included in Greentech OESS portfolio already used by some of the leading railway companies worldwide to offer cutting edge solutions to energy recovery, peak shaving and catenary-free applications.

Skeleton Technologies recently announced the closing of a further â¬29 Million in its Series D round of funding. With this development, the total funding in Round D now amounts to â¬70.4 Million including the â¬41.3 Million announced in November 2020.

This round follows the company’s â¬51 Milion funding by Germany’s Federal Ministry for Economic Affairs and Energy (BMWi) and the Free State of Saxony, announced in March 2021.

recently announced plans to develop new production technology and fully automate manufacturing in its GroÃrÃ¶hrsdorf factory. The manufacturer of graphene-enhanced supercapacitors has unveiled plans to develop a first-of-its-kind production technology for the manufacturing of its products, following the official support announced by German authorities. These plans include a fully-automated ultracapacitor production line in its GroÃrÃ¶hrsdorf factory. The economies of scale provided by this new technology, combined with the use of Skeleton’s patented curved graphene material, is expected to dramatically drive the production costs down.

We are continuously investing in R&D whether it is improving the performance of our products or the process in which we make those products. The next stage of our production will see an implementation of fully automated Industry 4.0 manufacturing techniques a first-of-its-kind in the ultracapacitor industry. Coupled with our curved graphene material, we are able to dramatically decrease the cost of ultracapacitors. The ultracapacitor industry is in the same situation as lithium-ion batteries were in 1999, but our advancements in core technology and production capabilities will be able to show a cost reduction faster than for any other energy storage technology. We have a clear road map to lower it by almost 90% after completion of our 5 years project, says Taavi Madiberk, CEO and co-founder of Skeleton Technologies, in a press release.

Skeleton Technologies, Estonia-based manufacturer of graphene-enhanced supercapacitors, and Marubeni Corporation, one of Japan’s largest conglomerates, have signed a strategic cooperation agreement to support commercial scale-up and customer acquisition for Skeleton’s supercapacitors in the Asian automotive sector, with a strong focus on electrified vehicles and hydrogen transportation.

As part of this agreement, Marubeni Corporation also made an equity investment on top of the â¬41.3 million Series D financing round announced by Skeleton in November 2020. The sum of Marubeni’s investment was not disclosed.