Researchers at the Norwegian University of Science and Technology's (NTNU) Department of Electronic Systems, led by professors Helge Weman and BjÃ¸rn-Ove Fimland, have succeeded in building UV LEDs by growing AlGaN nanowires on graphene. "We've shown that it's possible, which is really exciting," says PhD candidate Ida Marie HÃ¸iaas, who has been working on the project with PhD candidate Andreas Liudi Mulyo.

A layer of graphene placed on glass forms the substrate for the researchers' new diode that generates UV light. Researchers then grew nanowires of AlGaN on the graphene lattice, using molecular beam epitaxy. This was conducted in Japan, where the NTNU research team collaborates with Katsumi Kishino at Sophia University in Tokyo.

Researchers from Italy's ISOF-CNR, University of Naples "Federico II" and UniversitÃ  di Modena e Reggio Emilia have developed new organic n-type FET transistors (OFETs) based on CVD graphene sheets. The researchers say that the new process and materials they used can enable flexible, transparent and short-channel OFETs - which could be used in the future for OLED or OLET (organic light emitting transistor) displays.

To create the new transistors, the researchers used thermally evaporated thin-films of PDIF-CN2 (a perylene diimide derivative) as the the organic semiconductor for the active channel of the transistor with the single-layer CVD graphene (grown at Italy's IIT institute) as the electrode material. The final device architectures have been fabricated via Electron-Beam-Lithography (EBL) and Reactive Ion Etching (RIE).

Aselsan, a leading Turkish defense company that produces military radios and defense electronic systems for the Turkish Armed Forces, has reportedly designed graphene-based OLED screen prototypes with what is said by the Company to be the highest pixel resolution yet achieved. 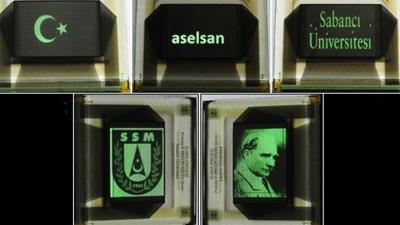 The project produced monochrome miniature screens that can function without backlighting, and the results of the graphene-based OLED screen development effort were presented at the Eurodisplay Conference in Berlin.

One year ago, researchers from the Korea-based ETRI (Electronics and Telecommunications Research Institute) demonstrated an 370x470 mm OLED array that use graphene transparent electrodes. 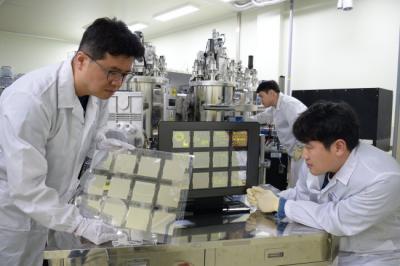 OLED displays are very sensitive to oxygen and moisture, and the need to protect the displays is one of the major challenges of this next-generation display technology. First generation OLED displays were protected with a glass barrier, but glass is not easily flexible and so cannot be used in flexible OLEDs. Flexible OLEDs are today encapsulation with a thin-film encapsulation layer made from both organic and in-organic materials, and companies are searching for better OLED encapsulation technologies. 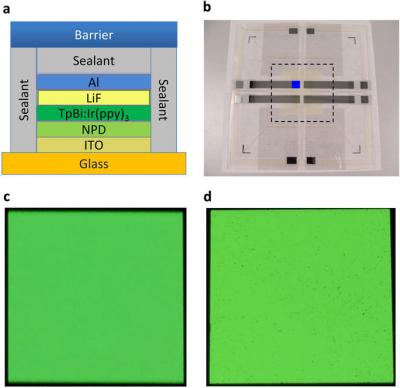 Graphene is the world's most impermeable material, and so the idea of using graphene as a barrier layer for OLED has been around for a while. In 2015 the UK launched a collaboration project called Gravia to develop graphene-based encapsulation, and the project's team has now reported their results.

Researchers affiliated with UNIST have raised the possibility of in-situ human health monitoring by wearing a contact lens with built-in wireless smart sensors. Towards this end, the team made use of smart contact lens sensors with electrodes made of graphene sheets and metal nanowires.

The smart contact lens sensor could help monitor biomarkers for intraocular pressure (IOP), diabetes mellitus, and other health conditions. The research team expects that this research breakthrough could lead to the development of biosensors capable of detecting and treating various human diseases, and used as a component of next-generation smart contact lens-related electronic devices.

The ETRI team designed a process that can pattern a graphene-made transparent electrode in accurate size on a glass substrate. The researchers replaced indium tin oxide used for current commercial applications, that is a rare metal known for being brittle.

Researchers from the Lodz University of Technology in Poland have designed a transparent, flexible cryogenic temperature sensor with graphene structures as sensing elements. Such sensors could be useful for any field that requires operating in low-temperatures, such as medical diagnostics, space exploration and aviation, processing and storage of food and scientific research.

Researchers from the University of Exeter have developed a new method for creating entire device arrays directly on the copper substrates used for commercial manufacture of graphene. Complete and fully-functional devices can then be transferred to a substrate of choice, such as silicon, plastics or even textiles. 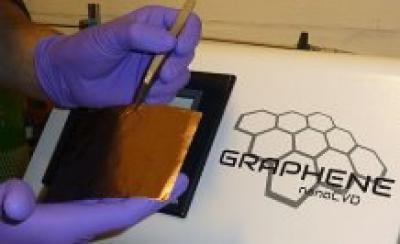 This new approach is said to be cheaper, simpler and less time consuming than conventional ways of producing graphene-based devices, thus holding real potential to open up the use of cheap-to-produce graphene devices for a host of applications from gas and biomedical sensors to displays.

Researchers at the Center for Multidimensional Carbon Materials (CMCM) within the Institute for Basic Science (IBS), have demonstrated a graphene coating that protects glass from corrosion. Their research has been said to hold potential for solving problems related to glass corrosion in several industries.

The IBS scientists grew graphene on copper and transferred either one or two atom-thick layers of graphene onto both sides of rectangular pieces of glass. The effectiveness of the graphene coating was evaluated by water immersion testing and observing the differences between uncoated and coated glass. After 120 days of immersion in water at 60 C, uncoated glass samples had significantly increased in surface roughness and defects, and reduced in fracture strength. In contrast, both the single and double layer graphene-coated glasses had essentially no change in both fracture strength and surface roughness.