» Graphene defects can make it weak as the material...

Researchers from Rice University and Tsinghua University discovered (using theoretical calculations) that defects in graphene can cause it to become weak - if they occur at the grain boundaries of graphene sheets. Those grain boundaries occur because graphene grown in labs (usually using CVD) are not perfect and this creates several "islands" of graphene that merge together. The researchers say that at these points, graphene is about half as strong as perfect graphene.

The atoms on the lines that connect those islands are called grain boundaries - and the atoms at those lines usually bond in five- and seven- atom rings. These are weaker than the normal hexagon rings of graphene. The weakest points are seven-atom rings. These are found at junctions of three islands, and that's where cracks in graphene are most likely to form. 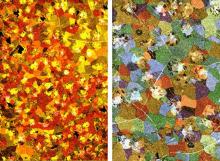 According to the researchers, the grain boundaries act like levers that amplify the tension and concentrate it at the defect either where the three domains meet (or where a grain boundary between two domains ends). Basically, the longer the lever, the greater the amplification on the weakest point.

Interestingly, a force on these junctions can cause them to crack, and then it can propagate in the graphene sheet as graphene is a brittle material. They say that graphene exhibits something like a Hall-Petch Effect that happens in crystalline materials, but it's a different mechanism in graphene so they call it a Pseudo Hall-Petch.

This contradicts with earlier research that says that certain graphene defects can actually make it stronger. It all depends on the defects of course. Basically it's best to have either defect-free graphene or one with controlled defects.

There has been already some research into grain boundaries of graphene. A few months ago we reported that those boundaries scatter the flow of electrons in graphene, which harms the material's electronic performance.