» A novel approach to interconnecting GNRs could lead to...

An international team of researchers at Tohoku University in Japan has demonstrated the ability to interconnect graphene nanoribbons (GNRs) end to end, using molecular assembly that forms elbow structures (interconnection points). This development may provide the key to unlocking GNRs’ potential in high-performance and low-power-consumption electronics. 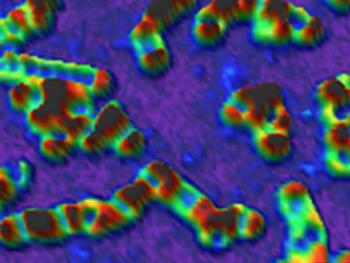 GNRs are interesting as their width determines their electronic properties; Narrow ones are semiconductors, while wider ones act as conductors, which basically  provides a simple way to engineer a band gap into graphene for use in electronics.

The major finding of this work is that interconnected GNRs do not show electronic disruption (e.g., electron localization that increases resistance at the interconnection points). The electronically smooth interconnection demonstrates that GNR properties (including tailored band gaps, or even spin-aligned zigzag edges) can be connected to other graphene structures. These results show that finding a way to connect defect-free GNRs to desired electrodes may be the key strategy toward achieving high-performance, low-power-consumption electronics.