» A novel method forms graphene out of buckyballs

Scientists at the Trento Institute for Fundamental Physics and Applications in Italy have found a way to make graphene using buckyballs as a starting point. The idea of using buckyballs as a precursor for graphene is not new, but a problematic one since the only way to get them to unzip and bind together is to heat them to temperatures in excess of around 600 °C. These high temperatures can change the properties of the substrate, in particular the amount of carbon it adsorbs, so the results are irregular films with serious defects. 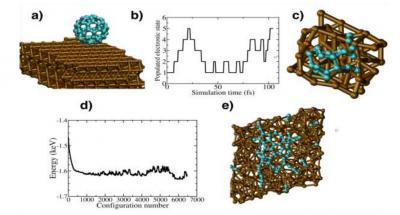 Their idea is to bombard the substrate with buckyballs travelling at supersonic speeds, fast enough to get them to open when they hit and the resulting unzipped cages then bond together to form a graphene film. The technique bypasses the usual problems - the team accelerates the buckyballs by releasing them into a helium or hydrogen gas which they allow to expand at supersonic speeds, carrying the carbon balls with it. That gives the buckyballs energies of around 40 keV without changing their internal dynamics (unlike ordinary heating which dramatically increases the molecular vibrations). They then aim the buckyballs at a copper sheet and let them smash into it, resulting in a fairly even coating of graphene-like material in a single layer.

This material has its own oddities. For a start, it is not made of regular hexagons, like perfect graphene. Instead it also contains pentagons which come from the original buckyball structures. That’s potentially useful because the pentagons could introduce a band gap into the material, something materials scientists have longed hoped to create in graphene.

Although just a proof of principle at this stage, the technique appears interesting because it produces relatively high quality films and could also be applied to a wide range of other materials such as metals, semiconductors and insulators, which could pave the way for a new generation of electronic devices.

I was just wondering why you guys were using copper to smash the Graphene out of the balls. Copper

just does not seem sturdy enough. Have you tried gold. Or a gold plated steel to even things out ?

I'm on LinkedIn if you want to respond.