Researchers at MIT and the University of Michigan developed a new roll-to-roll manufacturing method, that promises to enable continuous production using a thin metal foil as a substrate, in an industrial process where the material is deposited onto the foil as it moves from one spool to another. The resulting size of the sheets would be limited only by the width of the rolls of foil and the size of the chamber where the deposition would take place. 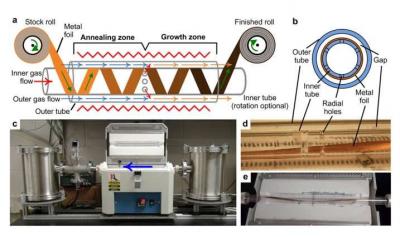 The new process is an adaptation of a CVD method already used at MIT (and additional places) to make graphene. The new system uses a similar vapor chemistry, but the chamber is in the form of two concentric tubes, one inside the other, and the substrate is a thin ribbon of copper that slides smoothly over the inner tube. Gases flow into the tubes and are released through precisely placed holes, allowing for the substrate to be exposed to two mixtures of gases sequentially. The first region is called an annealing region, used to prepare the surface of the substrate; the second region is the growth zone, where the graphene is formed on the ribbon. The chamber is heated to approximately 1,000 degrees Celsius to perform the reaction.

The researchers have built a lab-scale version of the system and found that when the ribbon is moved through at a rate of 25 millimeters (1 inch) per minute, a very uniform, high-quality single layer of graphene is created. When rolled 20 times faster, it still produces a coating, but the graphene is of lower quality, containing more defects. The team is currently studying tradeoffs regarding the selection of process conditions for specific applications, such as between higher production rate and graphene quality.