Graphene is a thin layer of pure carbon, tightly packed and bonded together in a hexagonal honeycomb lattice. It is widely regarded as a “wonder material” because it is endowed with an abundance of astonishing traits: it is the thinnest compound known to man at one atom thick, as well as the best known conductor. It also has amazing strength and light absorption traits and is even considered ecologically friendly and sustainable as carbon is widespread in nature and part of the human body.

Graphene-based supercapacitors are said to store almost as much energy as lithium-ion batteries, charge and discharge in seconds and maintain all this over tens of thousands of charging cycles. One of the ways to achieve this is by using a a highly porous form of graphene with a large internal surface area (made by packing graphene powder into a coin-shaped cell and then dry and press it).

Supercapacitors, also known as EDLC (electric double-layer capacitor) or Ultracapacitors, differ from regular capacitors in that they can store tremendous amounts of energy.

A basic capacitor usually consists of two metal plates, separated by an insulator (like air or a plastic film). During charging, electrons accumulate on one conductor and depart from the other. One side gains a negative charge while the other side builds a positive one. The insulator disturbs the natural pull of the negative charge towards the positive one, and that tension creates an electric field. Once electrons are given a path to the other side, discharge occurs.

Supercapacitors also contain two metal plates, only coated with a porous material known as activated carbon. They are immersed in an electrolyte made of positive and negative ions dissolved in a solvent. One plate is positive and the other is negative. During charging, ions from the electrolyte accumulate on the surface of each carbon-coated plate. Supercapacitors also store energy in an electric field that is formed between two oppositely charged particles, only they have the electrolyte in which an equal number of positive and negative ions is uniformly dispersed. Thus, during charging, each electrode ends up having two layers of charge coating (electric double-layer).

Supercapacitors boast a high energy storage capacity compared to regular capacitors, but they still lag behind batteries in that area. Supercapacitors are also usually more expensive per unit than batteries. Technically, it is possible to replace the battery of a cell phone with a supercapacitor, and it will charge much faster. Alas, it will not stay charged for long. Supercapacitors are very effective, however, at accepting or delivering a sudden surge of energy, which makes them a fitting partner for batteries. Primary energy sources such as internal combustion engines, fuel cells and batteries work well as a continuous source of low power, but cannot efficiently handle peak power demands or recapture energy because they discharge and recharge slowly. Supercapacitors deliver quick bursts of energy during peak power demands and then quickly store energy and capture excess power that's otherwise lost. In the example of an electric car, a supercapacitor can provide needed power for acceleration, while a battery provides range and recharges the supercapacitor between surges.

Several materials exist that are researched and suggested to augment supercapacitors as much (or even more than) graphene. Among these materials are: hemp, that was used by Canadian researchers to develop hemp fibers that are at least as efficient as graphene ones in supercapacitor electrodes, Cigarette filters, which were used by Korean researchers to prepare a material for supercapacitor electrodes that exhibits a better rate capability and higher specific capacitance than conventional activated carbon and even higher than N-doped graphene or N-doped CNT electrodes.

Graphene supercapacitors are already on the market, and several companies, including Skeleton Technology, the CRRC, ZapGoCharger, Angstron Materials and Sunvault Energy are developing such solutions. Read our Graphene Supercapacitors market report to learn more about this exciting market and how graphene will effect it. 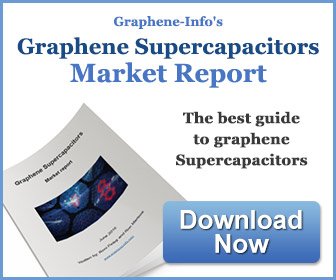 Q: We understand that the Graphene Flagship is attending Enlit Europe 2022, showing some new graphene R&D projects. We'll be happy to get an overview of what will be displayed at the event.

At Enlit Europe, the Graphene Flagship exhibited innovations from its Spearhead Projects, which are industry-led initiatives working to move materials from research labs towards commercial applications. Among these initiatives are:

Reports suggest that Chinese startup Caiqi Xin Cailiao (Caiqi New Materials) is preparing to mass-produce graphene materials for supercapacitors, in the near future.

According to these reports, Caiqi has already completed mass production trials and a fundraising round of about 10 million yuan ($1.4 million).

First Graphene has announced it has secured grant funding, in conjunction with the University of Manchester (UoM), for the next stage of research into commercializing graphene-enhanced supercapacitor materials.

Awarded through Innovate UK’s “Accelerated Knowledge Transfer to Innovate” scheme (AKT2I),
the grant will be used to fund a project intended to accelerate development and optimization of a
graphene-metal-oxide slurry for manufacturing high energy density supercapacitors.

Today we published a new edition of our Graphene Supercapacitors Market Report, with all the latest information. The supercapacitor market and industry is facing high demand and graphene is a pivotal material for this application. This new updates includes a revamp of the general report, and updates from over 10 companies and research activities. 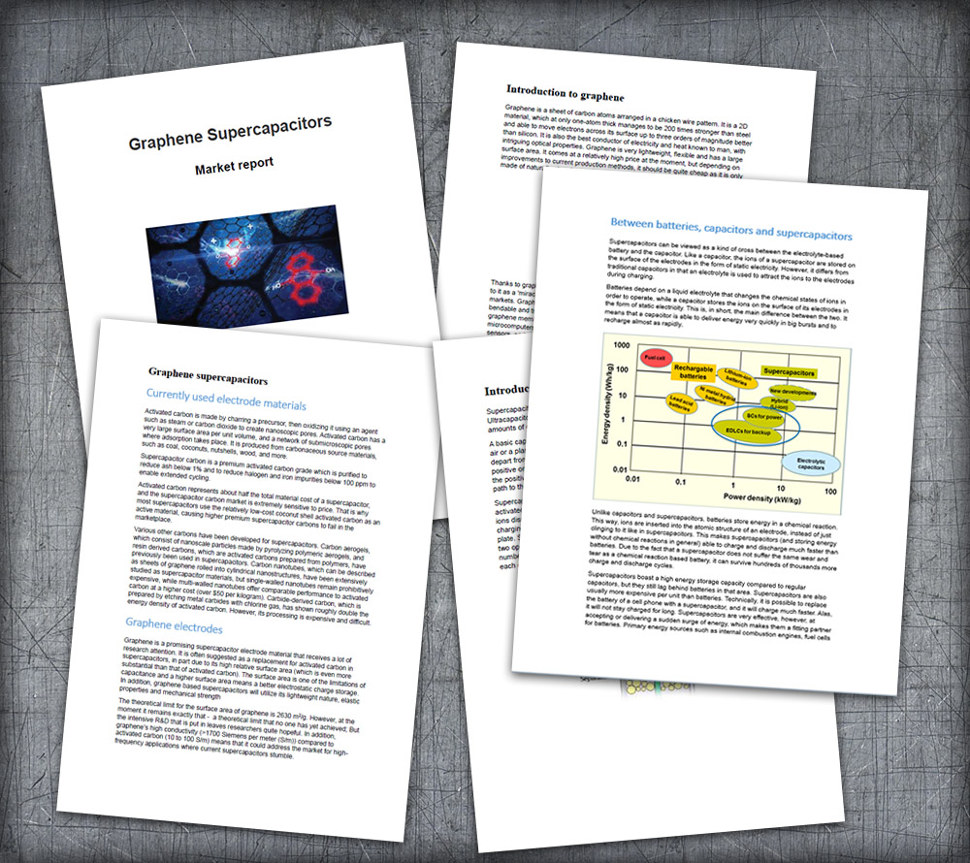 TRANS2DCHEM, or “Transition of 2D chemistry-based supercapacitor electrode material from proof of concept to applications”, is a project that received € 2,485,717 from the EIC to create supercapacitors with increased energy density (above 50 Wh/L, which is about twice as much as the best components on the current market).  This will allow their widespread use in electric cars as well as a battery support in devices that need to be supplied with large amounts of energy in a very short time. 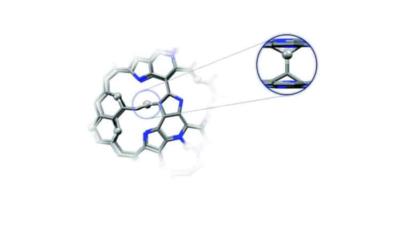 The researchers involved in the project utilize highly nitrogen doped graphene material (SC-GN3), offering energy density up to 200 Wh/L at a power of 2.6 kW/L, 170 Wh/L at 5.2 kW/L, and 143 Wh/L at 52 kW/L. The international team is developing supercapacitor prototypes, with manufacturing techniques that adhere to industry standards of leading supercapacitors manufacturers.

Skeleton Technologies has officially launched its SuperBattery, and unveiled Shell as its partner. Skeleton is joining a Shell-led consortium to offer electrification solutions for mining sites. 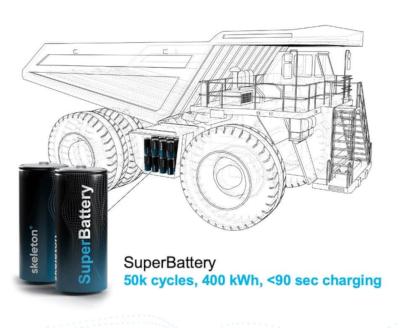 SuperBattery is an innovative technology combining the characteristics of supercapacitors and batteries. SuperBattery has been developed to serve the needs of several sectors and is currently being used and/or tested in hybrid and fuel cell EVs, buses, trucks, and charging infrastructure.

Skeleton Technologies has announced that it will supply its 'curved graphene'-enhanced supercapacitors to the metro units that Spanish manufacturer CAF will provide to the city of Granada, Spain.

Headquartered in Donostia - San Sebastian (Spain), the CAF Power & Automation has been working with Skeleton Technologies since last year. Following a successful tender, the Spanish manufacturer has been selected by the Metro de Granada to supply 8 new units for the city's network, which will be added to the 15 previously-delivered units which are
currently in service.

Ni-Co layered double hydroxides (LDH) are seen as promising materials for pseudocapacitor electrodes. Researchers from Chonnam National University and Korea Institute of Science and Technology (KIST) recently conducted a study that focused on the use of graphene oxide (GO) and single-walled carbon nanohorns (SWCNHs) hybrid as an efficient platform for LDH coating materials for supercapacitor electrodes.

The team explained that the novel Ni-Co LDH and GO/SWCNHs composite-based supercapacitor electrode material could be a potential choice for pseudocapacitor applications thanks to its superior electrochemical properties and ease of production, which is ideal for various commercial and industrial applications.

Today we published a new edition of our Graphene Supercapacitors Market Report, with all the latest information. The supercapacitor market and industry is facing high demand and graphene is a pivotal material for this application.